RTW and BI have various helpful command line functions, some of which are listed below. To add a command line function, right click your desktop shortcut, select properties, and after the last " in the target line type a space and the function you require. More than one function can be added to the same line, just remember to put a space between each. Finished result can look like: 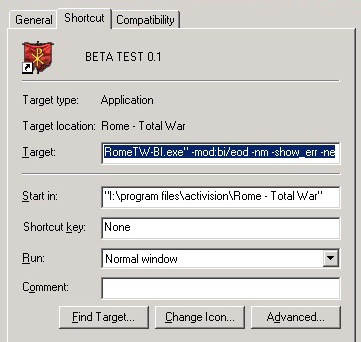 -show_err every modders best friend, gives basic error messages for most problems. Anyone modifying game files or playing a mod should use it.

-mod:my_mod the user friendly way of releasing a mod. Also useful for home mods. Saves having to have multiple RTW/BI installs and allow multiple mods to run on the same installation. Temporary link to info: http://forums.totalwar.org/vb/showthread.php?t=44332 (needs summarising here)

-ne allows game to run in windowed mode. Leave a program or file open before you start the game and use alt-tab to return to that program or your desktop without quitting game. You can alt-tab out of game anyway but this allows game to keep running in the background. Useful if waiting out siege battles or using -ai (see below)

-nm disables the introductory videos giving quicker start. Removes the need to hit Esc to stop videos when loading. Sounds minor but when modding after the 100th restart you'll understand.

-sprite_script disables the game but makes sprites for you instead.

-ai launch game with that on shortcut and when you start campaign the AI takes control of all factions. Useful for testing to see if you have any long range date related bugs and to view AI expansion in mods. All battles are resolved on autocalc so expansion may not be the same as if playing game yourself.

-strat:campaign_name (campaign_name is the name of a subfolder within data\world\maps\campaign). This skips all the menus and immediately starts a new campaign that you specified. This can be useful for repetitive testing of the campaign. By default, the faction is romans_julii, as it is the first playable faction. To start with another faction, simply put every factions except this one as unplayable in the descr_strat.txt.

-noalexander forces the Alexander exe to use the mod as the main campaign.

I'm sure there's more - please add any others to list above.