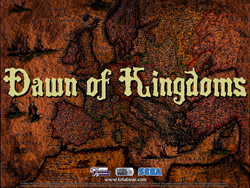 The Dawn of Kingdoms is a modification for Medieval II: Total War, playable with the Kingdoms expansion. Its mod developer is Lord Condormanius.

This mod started in the early months of 2007 by Lord Condormanius, as the Middle Ages: Total War mod. Lopus, der Kaiser and Heretic Fang soon joined in and the mod got very soon (less than one month after initiation) its own hosted forum at TWC. The mod was renamed to Dawn of Kingdoms during the early stages of the mod development, June 2007. Fra70 joined the mod team later, while Lopus and der Kaiser dropped off. Eventually, Lord Condormanius was left as the sole mod developper of the mod and released the v.0851 beta version in November 2008. Currently (late 2011), in the mod leader's own words '...modding has taken a back seat to [his] children and work. [He]'ll get back to it eventually'.

This is currently a personal mod and Lord Condormanius, usually referred to as 'LC', is the only modder working on it.

The Dawn of Kingdoms Hosted Forum at Total War Center

YOU can help us improve this Wiki! ~ Look for Ways to Help and Things to Do. ~ If you need further advice, please post here.
Retrieved from "https://wiki.twcenter.net/index.php?title=Dawn_of_Kingdoms&oldid=81181"
Categories: