East of Rome is a modification for Medieval 2: Total War Kingdoms concerned with the world of Late Antiquity, and especially, though not exclusively, the late Roman Empire centred on its capital at Constantinople.

The sixth century is considered, with the hindsight of the historian of the early 21st century to be a period of great change, and yet, for the average man or woman living in the year 519, when the EoR mod begins, it must have seemed like little had changed. The towns and cities of the Eastern Mediterranean were ruled, as they had been for the past five hundred years, by a Greek speaking administration on behalf of a primarily Latin Roman Empire. A few hundred miles to the East, the mudflats of Erak, 'Mesopotamia' to the Greeks, were ruled, just as they were a thousand years previously, by a Persian. Between these two great Empires, the small kingdoms of the Caucasus continued to jostle for influence, fully part of neither a Roman, nor an Iranian world. Even in the lands of the West, lost to Rome's Empire in the previous century, nothing seemed to have "fallen"- still Roman aristocrats taxed flourishing towns and cities to support their luxurious lifestyles in rural villas- the only difference in the year 500 compared to the year 400 is that they were now aided and abetted in this by new, Germanic rulers.

And yet, over the sixth and seventh centuries, this world that was seemingly so secure and timeless would vanish for good. That it did so was due to a series of events that were very largely of its own making- endless war and religious tension mixed together in a volatile cocktail. By the end of this period, known to historians as "Late Antiquity", Rome's dominion over the Mediterranean would be gone for good with the Empire itself surviving only as a bleeding rump, while the great Persian Empire of the Sasanian dynasty- Ērānšahr would be wiped out altogether. How did this come about?

Many of the changes of the sixth century were driven by the figure of one extraordinary figure- Petrus Sabbatius Iustinianus, better known to us as the Emperor Justinian. Originally a peasant from what is now Serbia but what then was a Latin speaking land known to the Romans as Illyricum, Justinian came to Constantinople, capital of the Roman Empire for some two centuries, as a young man, perhaps lured by the Imperial service into which his uncle Justin had risen rapidly in. In 518, following the death of the Emperor Anastasius Justin and his nephew were able to secure for themselves the throne of the Roman Empire, and to begin a dynasty that would reign for the next sixty years. In 527, Justinian himself became Emperor, flanked by his formidable consort Theodora and a host of other impressive courtiers- the eunuch general Narses, the dashing young commander Belisarius, and the gifted bureaucrats John and Tribonian.

Justinian's great vision was one of renewal- to bring his Empire back in touch with her proud heritage. Early in his reign, he ordered the systematic compilation of a millenium's worth of Roman law, accomplished in just a few years by a dedicated team of jurists. A series of major uprisings that left half of Constantinople a smoking ruin was seized by the Emperor to rebuild his capital along new, grand lines. And, perhaps most spectacularly of all, military expeditions to the West brought back into the Imperial fold the fertile provinces of North Africa and the Empire's old homeland of Italy. After just thirteen years on the throne, Justinian could justifiably claim to be the greatest Emperor Constantinople had seen in generations.

Beginning in the year 540, though, things began to take a dramatic turn for the worse. After enduring several years of humiliating peace, the Iranians under their magnificent king Xusrō were ready to strike back. Just like Justinian, Xusrō was a dynamic reformer, determined to set his state on a new basis for the future. To do this, he secured the support of the dehgāns, the lower gentry of the Iranian plateau, and engaged in a process of millitary reform and renewal. Vast fortifications were raised to protect Ērānšahr the raids of the barbarians of the Great Eurasian Steppe, and, again, echoing his Roman counterpart, Xusrō codified the laws of his kingdom. With the kingdom of the Sasanians thus set on a more secure footing than ever before, Xusrō could go on the offensive, and in 540 he sacked Antioch, jewel of Roman Syria. For the next century, peace would be rare on the long frontier between Rome and Iran. Seizing the opportunity provided by the sudden eruption of warfare in the East, the Goths of Italy, confidently assumed by the Romans to be barbaric pushovers, turned the tables of the Italian war, and would mount an effective resistance for another fifteen years. In the process, Italy herself would be devastated.

In 542, a devastating outbreak of plague burst out across the Roman Empire, and, within the next few years, had spread to afflict both the Iranians and the Germanic kingdoms alike, devastating the urban culture that had flourished since the balmy days of the Emperor Augustus. Justinian, refusing to bow down before these unexpected changes in fortune, abandoned the excess and glory that had characterised the early years of his reign. The Roman Empire's budget deficit was ruthlessly cut, despite the howls of vested interest groups. Gothic resistance was finally shattered in 553, and a vast series of fortifications were erected to defend the Empire. Justinian died in 565 with Roman power seemingly intact- but had his desperate surgery to the Empire in fact doomed it?

The years after Justinian were marked by the ineffective reigns of his nephew Justin II, and Justin's adopted son Tiberius II, both of whom were dominated by the Empress Sophia. Together, this threesome were able to, just, keep the show on the road, but difficulties were constantly mounting. In 573, Xusrō's men captured the great Roman fortress of Dara, sending the Emperor Justin mad with rage. The news from the other frontiers was unremittingly bleak, caused in large part by the rise of a powerful new tribal confederacy led by the Avars, a Turkic people who had descended from the steppe. The Avars destroyed the delicate balance of power that had prevailed on the northern frontiers of Justinian's Empire, and sent a flood of refugees into Imperial territory. With every available man needed to guard the East, the defences of Italy and the Danubian provinces proved unable to hold back the invaders. From 568, the Italian peninsula was progressively nibbled away at by a Germanic people known as the Lombards, while the provinces of Illyria- those same lands that Justinian had left as a boy seventy years previously- were subjected to an unceasing torrent of new settlers, a people known to the terrified provincials as the "Sklavenoi", the Slavs. The frontiers in the East, despite the occasional defeat, were held by Justin and Tiberius. But in the West, the Latin core of the old Roman world was entering into what appeared to be a ceaseless death-spiral.

The brand-new East of Rome Map covers an area from modern Germany to Afghanistan and from Siberia to North Africa. 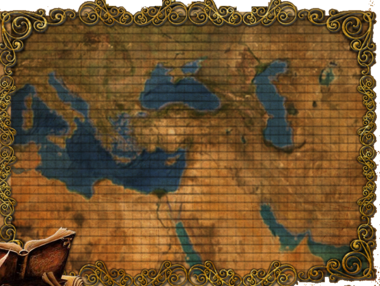 The map focuses on the eastern Mediterranean sea and the Middle East, both hotspots of sixth century history. The lands on this map are among the wealthiest and most advanced on earth at the time and have seen many great empires rise and fall. Through them pass the great trade routes of antiquity, most famous of which is the silk road. However, the steppes and woods to the north and the deserts in the south are both home to poorer, but aggressive peoples that will try to seize control of rich cultural centers along the Mediterranean coast and the Mesopotamian valleys.

The game offers ten all-new religions that dominated the world of late antiquity. Each has its own building tree and individual character traits. Most importantly, every character, including faction leader and heir, has his own religion. Since religion played a very important role in the time, a character's religion will be a decisive trait that will define his loyalty and his view on the world.

In East of Rome the religion of the faction leader will determine the state religion. This may cause great instability, but will also give new opportunities to the player.

The following religions will make an appearence in East of Rome:

The Optimates - a new Roman unit

East of Rome features 250+ new units. All are based on historical research and reflect a realistic roster of every faction at the time.

The mod plays in a very turbulent time, marking the final end of the classical world and the onset of what we know now as the Middle Ages. Rome's unified hegemony has gone from the West, and, even if it remains strong in the East, troubles are rising across the frontiers. In Iran, meanwhile, the Sasanian monarchy is undergoing a period of renewal and rebirth, in the process building an almost new pan-Iranian state.

As a player of the large empires at the centre of the map, namely the Roman Empire, the Ostrogothic Kingdom and Sasanian Iran, your task is to preserve your traditional heritage and wealth while fending off barbarian tribes from the north and south. It is of utmost importance to create the much-needed stability and internal peace to be able to eventually expand your inherited territory once more.

As a player of either the northern Germanic and Steppe tribes or as the southern Arabs, your task will be to carve out a largest possible piece out of the old world and claim it for yourself. To triumph over the old powers, it is necessary to build an respectable empire on your own and to wait for the right moment to deal the death blow to the classical World!

In the process of developing East of Rome the team will release several sub-campaigns, all of which are stand-alone mods that will later be incorporated into the main game. Every campaign focuses on a different geographical area, a different timeframe and a different setting.

The first of these sub-campaigns will be the The Danube Limes campaign. It focuses on the lower Danube and Balkan area and begins in 591 AD. Its setting is the Slavic Migration onto the Balkans and the Balkan campaigns of the Roman emperor Maurikios. The player can choose either to defend the Roman Empire from this new barbarian threat or to capture a new homeland for the countless Slavic tribes south of the Danube. He can also choose to lead the powerful Steppe people of the Avars against the weak Romans and eventually capture the queen of cities, Constantinople.

More sub-campaigns are planned, they will be revealed as the mod development continues.

YOU can help us improve this Wiki! ~ Look for Ways to Help and Things to Do. ~ If you need further advice, please post here.
Retrieved from "https://wiki.twcenter.net/index.php?title=East_of_Rome&oldid=79478"
Category: