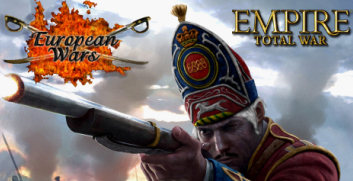 'European Wars' - a realism-mod for 'Empire: Total War', taking us to the world of 18th century, considered one of the most important and interesting periods in history, as it brings many economical, social and first of all military changes. The most important military events brought by the age of enlightenment are Spanish and Polish Successions, The Great Northern War, The Scottish Jacobite Rebellion and The Seven Years' War. As you can see, this century brings much excitement and is excellent material for strategical game. 'European Wars' mod focuses on increasing the historicity of 'Empire: Total War', mainly trough adding some new, historically accurate units such as Prussian Leib-Garde Grenadiers, Hussars of Death, Polish Winged Hussars, French Mousqetaires de la Garde and many, many others!

With the 18th century moving on, the uniforms of all European armies were changing. The 'early' infrantry units' look will be based on historical sources from years 1700-1730, while the 'late' units will have their look based on sources concerning years 1757-1789.

We'll add a lot of historical units and delete those inaccurate. Some examples below:

-Divison of the cavalry to regiments of horse, dragoon and light dragoon will disappear in most factions (only USA and UK are going to keep it) -In EW, most factions' line cavalry will be reduced to dragoons (in hats called tricornes) only. Only French dragoons will wear helmets (golden colour). UK dragoons will also have hats like all other European dragoons and only UK and USA light dragoons will keep the helmets. -New types of guards will be available with musketeers & grenadiers of the guard among them as well as new cavalry units - horse grenadiers.

Despite that on the battlefiled Polish troops wear red uniforms with some white details and the British got the same colour of uniform but blue detail, both Polish and British units on the Unit Cards still remain red with yellow details (so it's impossible to distinguish them). Similliar problem applies to Austria and France, not to mention all the minor factions. Some factions in vanilla ETW have completely different UI, for example Siberian hunters have rangers' card. In 'European Wars 2' mod all units will be coloured separately!

In our mod we will take care of each unit by giving him his own unique and accurate name, short description and regiments.

Many different types of haircut will be added: late period units will have white hairpieces and growls, while the early ones won't. British units will have smoothly shaven facial hair, while other European factions will have soldiers with a moustache. All hussars and cuirassiers will have moustache in accordance to 18th century regulations. All to make player feel the climate of this period and to make the game as realistic as possible.

First version of the mod featured just about 10 KLA's reskinns + few my gameplay changes (mainly for eastern Europe) and Darth Vader's AI, but since the beginning we knew, that this is going to be global modification for all factions, changeing nearly everething to make the mod more historical accuare and more interesting, so the next version was much bigger. It included division to early and late units for major factions, previous and new gameplay changes, updated AI and many KLA's reskinns/new units. Unfortunetly I didn't have enough time to create the pack, becouse I was going to the holidays and the campaign map didn't work and player could play only custom battles. I fixed everething when I returned, about one month later and KLA made 2 new reskinns. This was our beginning. The fourth version was much more professional. I included all previous changes + updated AI, new gameplay changes, fixed bugs and next new units taken from other modders (all is in credits). This was the first version, that made me really proud, but of course this wasn't enough. We were going to include our first big change in o.5 version (realesed on Christmas), what was full reskinn and completly changed unit roster and gameplay settings for Prussia. Unfortunetly this was the first time, when me and KLA wrangled about the future of the mod. He made only 7 new reskinns and the rest (about 30 units) ordered to take from other modders. I was really angry about this, becouse I worked very hard since the beginning, while he didn't do anything. 0.5 was realesed on Christmas, but whithout most of the units, I was going to add, becouse I got illed and couldn't work on the mod I fixed this in next version, added next changes and realesed the game in February. Unfortunetly me and KLA started to wrangle agian, much more often that earlier about the same reason, so I levt the mod in march realesing last 0.61 version with new units (some were made by PrisonNeo, our new skinner, 3 by KLA and the rest by other modders) and gameplay changes. I returned to the mod about one month later ans started to make new, 0.7 version, but I stopped after several days...Since that day no changes have been done.

(An interesting fight between the Austrian (Hungarian) grenadier and Gardes Francaises with some quite unexpected ending...) 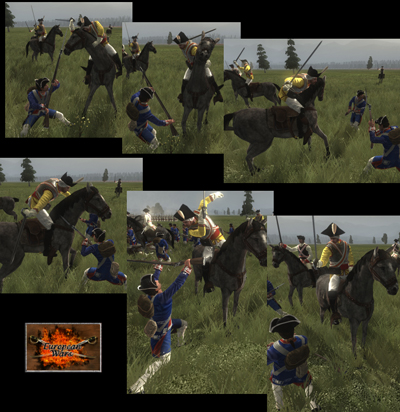 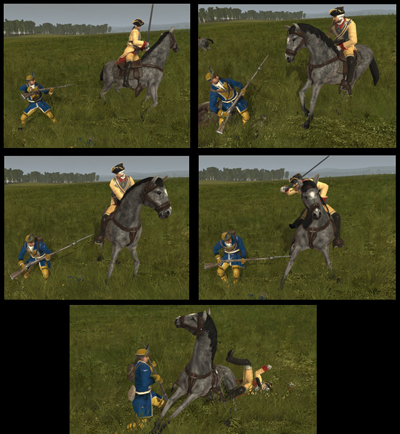 YOU can help us improve this Wiki! ~ Look for ways to help and editing advice. ~ If you need further advice, please post here.
Retrieved from "https://wiki.twcenter.net/index.php?title=European_Wars_2&oldid=79359"
Categories: