An improved version of the Vanilla Medieval 2 game with a larger more accurate America's and an accelerated start point. The emphasis of the mod is more on making the campaign challenging and fun than historical accuracy. 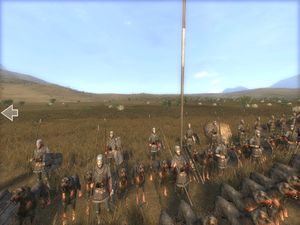 Wardogs which were ported from the RTW.

The mod came into being after Eothese had tinkered with descr_strat in order to allow the game to reach a more advanced state before Eothese completed my campaigns. From there Eothese started looking at mods on the TWC site, along with the workshop section. Eothese decided to expand the map west and improve the Americas after seeing a tutorial by J@mes. The mod grew from there fed mainly by Eothese's own desire to learn the different aspects of modding. One of the major challenges and Eothese's most fervent desire was to introduce the wardogs from RTW. This was only fully and completely realised with version 3.0 when a totally crash free fix was discovered.

YOU can help us improve this Wiki! ~ Look for Ways to Help and Things to Do. ~ If you need further advice, please post here.
Retrieved from "https://wiki.twcenter.net/index.php?title=Expanded_Americas&oldid=79324"
Categories: