Ferrum Aeternum or "Eternal iron". Medieval iron swords and spears and other arms and armor has shaped and re-shaped the political map of our world, helping kings to regain their crowns or to lose. Bringing the west and the east into a single campaign and let the player decide wich iron sword will shape the course of the world. 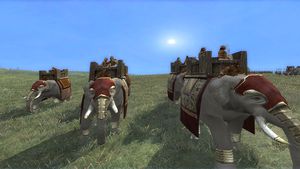 This mod have started in late 2007 wich the first concept was simply a mini-mod based on events with historical information. Back than was just two members Ataegina and TheFirstONeill but quickly the mod expanded by importing kingdoms factions and everything on the mod start changing.

Ferrum Aeternum development haven't been always smooth, with changes on team and on wich course the mod should take and everything have take over an year to decide what would it be regarding the concept and path to be taken. Since the beginning the mod had ambition plans but the lack of members have made this always hard to acomplish yet with only a few members and dedication many objectives have been acomplished. What make this mod and team goes along and wanted to create the mod was the fact we wanted a mod without be too west or too east, not just christian or not just islamic and all the development have been around the concept of many cultures one only mod, but years of development and some disagreements have broke out and several times mod have been halted and stoped, but the mod was revived on 2010 by new members wich Master Zuma have emerge was the most notable one for the public release.

YOU can help us improve this Wiki! ~ Look for Ways to Help and Things to Do. ~ If you need further advice, please post here.
Retrieved from "https://wiki.twcenter.net/index.php?title=Ferrum_Aeternum&oldid=79342"
Categories: