This mod is based on DimeBagHo's excellent mod of RTW, XGM or Extended Greek Mod, and aims to go even further in developing the Hellenistic factions and providing Sparta as its own complete culture! Focusing and attempting to emulate the problems of unity the the Greeks faced, first in opposition to Macedonia and secondly to Rome and thirdly to limit the expansion options of the Achaean and Aetolian Leagues and of course Sparta. Hopefully if you play as any one of these small players of the Hellenistic World you may see what problems they faced in historic reality. 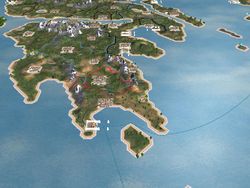 The Historical Setting is the Hellenistic world of 272 BC, Pyrrhus has abandoned Italy, and forsworn his Macedonian adventure to put Cleonymus on the Spartan throne. He has brought a large army to the Peloponnese to beseige Sparta while Areus and the bulk of the Spartan hoplites are away in Crete.

The Aetolian league has already embarked on its expansion drive with the inclusion of Heraclea-Trachina and is casting envious glances towards the control of Delphi and Thessaly. The Aetolians like the Cretans were of a piratical nature taking from friend and foe alike.

The Achaean league has only just been formed from the cities of Achaea proper. it will take a statesman of Aratus' stature to widen the league to the rest of the Peloponnese. In the meantime it must survive as best it can.

Rhodes, Syracuse and Pergamum are lumped together in a loose alliance which includes the smallet Greek City States. Pergamum de jure is a part of the Seleucid dominions but de facto has become almost autonomous on the death of Lysimachus. Rhodes is a trading city and is allied to the Ptolemies at this time. In the next century these two states (Pergamum and Rhodes) will benefit from the demise of the Seleucids in the west.

Rome is bound for a united and Roman Italy driving out Gauls and greeks alike. Rome has lots of money, a large population and a low maintenance army, individually not the best and may suffer defeats but is quite capable of winning the last battle. Rome must eventually deal with its possible rival Carthage.

Carthage controls most of Sicily and the African coast. Sicily is a prosperous land and is vital as a springboard to enter mainland Italy. A naval invasion is a possibility, Carthage is a maritime power. Its army is mostly recruited from mercenaries and libyans, the carthaginian citizen prefers trade to soldiering. To the north the Gauls are quiet for now.

The Ptolemies have expanded onto the southern coast of Asia Minor including Cyprus and have recently taken Coele-Syria from the Seleucids. they have money and a large fleet.

The Seleucid dominions stretch from the Aegean to Media and beyond, it is a difficult empire to control but they have plenty of money and resources but many areas are prone to disaffection.

Pontus and the Armenians are fledgling kingdoms, nominally vassals of the Seleucids but in fact quite independent. They will need some careful nurturing in the early years.

In the unknown steppes to the north the Samartians gather to visit destruction on the civilised world.

The Galatian hordes brought in by the Northern League have settled in Phrygia and will bring chaos to the Hellenic World of Asia Minor.

The Northern League is a loose federation of Greek City States including the Bithynians.

Antigonos Gonatas controls the Macedonian homelands, and possesses the "fetters" Corinth, Chalcis and Demetrius.The Greek City States are not quiescent and are not about to succumb to Macedonian Hegemony again. One of these under their young king Areus of Sparta, with pretentions of being a Hellenistic King and with a little egyptian money, is ready to lead the Greek States to 'freedom'.

The Spartan Hoplite in this mod is not the killing machine of a certain recent film but he still is a formidable opponent if supported properly. he is expensive to produce and takes a longer time to train (attempt to simulate a dwindling citizen base). Sparta will have to fall back on the cheaper and more numerous perioici, freed helots and mercenaries. Sparta is surrounded by enemies, short of men and money.

My rational in producing this mod was originally just to create a playable Spartan faction for personal use only and as someone new to modding RTW this seemed for me sufficient but I was persuaded, although it didn't take much, to expand my horizons to a full mod with all that entails from mapping to skinning and text modification. But where should I start, which modification should I use to base this on. I chose to look at 3, RTR PE, EB and XGM and although all three are excellently crafted mods I chose XGM because as well as being a stable mod, it looked simpler to modify and it ran more quickly and smoother than the other two on the limited functionality of my laptop.

However for my purposes it had one problem and that was because the Mundus Magna map covered too much of the world for me to get sufficient detail into the Greek Homeland. I came across the Barebones 3.1 map which cut much of the Seleucid eastern regions out and looked just the ticket for my needs. Though its geography and terrain isn't totally accurate it is still an excellent starting point for any new modder. Using this I was able to go into much more detail generally and in Greece in particular. The reason for concentrating more detail on the Greek regions was to try and emulate the problems of unity that the Greeks faced, first in opposition to Macedonia and secondly to Rome and thirdly to limit the expansion options of the Achaean and Aetolian Leagues and of course Sparta. Hopefully if you play any one of these small players of the Hellenistic World you may get to see some of the problems they faced in historic reality.

None at this time.

YOU can help us improve this Wiki! ~ Look for ways to help and editing advice. ~ If you need further advice, please post here.
Retrieved from "https://wiki.twcenter.net/index.php?title=Hic_Est_Lacedaemon&oldid=79586"
Category: