INVASIO BARBARORVM 2, is a series of modification for M2TW Kingdoms set in the late Roman Era, the mod is planned to be developed by sub-campaigns focusing on major events of the era building up to a final grand campaign set during the fall of the Western Roman Empire. 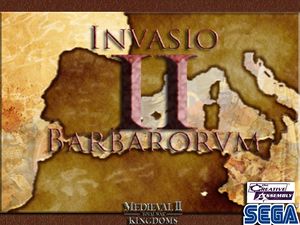 The first installment of Invasio Barbarorum 2 is Africa Vandalorum. Set in 426AD, the year the Vandals crossed into Africa at the invitation of Bonifacius. The campaign will feature a map of the Western mediterranean from Diocese Pannoniae to Diocese Hispania (under the Vandals and Suebians)

The first installment will feature the following factions:

Recruiting your units in IBFD depends on your culture.

siege engineers are simply that, buildings to build siege engines, archers are trained in standard barracks or called up from the population.

Smithies are also necessary to train heavily armored units. Since the building requirement to train units is bugged in 1.6, this has been decided to be the best solution. For the cultures that do not recruit from barracks/stables, these builings give morale and experience bonuses, and are still worth building.

Below is a typical Roman building tree.

YOU can help us improve this Wiki! ~ Look for ways to help and editing advice. ~ If you need further advice, please post here.
Retrieved from "https://wiki.twcenter.net/index.php?title=Invasio_Barbarorum_II&oldid=84114"
Categories: