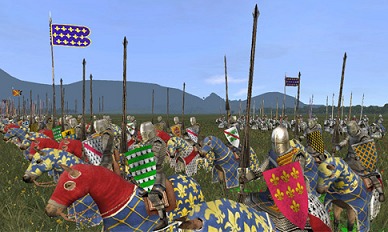 This is a mod for Medieval II: Total War. This mod adds over 130 new main banners, many new upgrade banners and over 300 new shield textures for Medieval 2. Every one of the large factions have received new banners. There also created a system which will allow more banners for each faction than was available in vanilla. Developer tried to make all textures as historically accurate, as was possible.

These special units are recruitable in special cities/castles and are rare. Order Knights;
Complete with own uniforms, banners and shields:

Some of the units have special banners, which are only for them. Examples: Templar, Teutonic order (3 different), special units

The heraldic symbols are from historical sources.

The heraldic symbols are from historical sources.

YOU can help us improve this Wiki! ~ Look for Ways to Help and Things to Do. ~ If you need further advice, please post here.
Retrieved from "https://wiki.twcenter.net/index.php?title=King%27s_Banner&oldid=79716"
Categories: