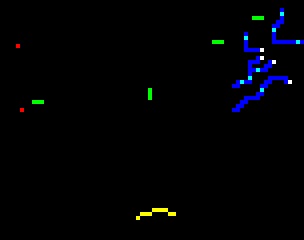 Fords across the river are marked with a cyan pixel (RGB 0,255,255), these are the places that armies and roads can cross the river. If a river completely divides a region bounded by edge of map and or sea it may be necessary to have at least one fording position to avoid CTD on loading campaign (that appears to be linked to path finding problems).

The origin of the river must be marked with a white (RGB 255,255,255) pixel. A river must have at least one outlet, e.g. a blank end without a white origin pixel this does not have to meet the sea, but it looks rather silly if it doesn't. A river can have more than one origin with the branch joining the main river, it may also fork into different outlets. Once forks are made do not attempt to rejoin the rivers.

The line of the river should not be broken as in Fig 3. Diagonal corners of pixels joining is not sufficient.

A square 2 x 2 block of river pixels as shown in Fig 4. will result in a CTD without error message when attempting to generate map.rwm for new campaign.

Cliff positions are marked in pure yellow (RGB 255,255,0. The presence of cliffs prevents units disembarking from ships along the effected stretch of coastline.

For Rome - Total War and its' expansions a cliffs_debug.tga is generated in the root RTW folder each time a new campaign is started without a map.rwm. original author of article doesn't know what this file does! Please add info...

For M2TW only the ability to add long land-bridges has been added. They are shown as green lines (RGB 0,255,0) on the map_features.tga. The line of the land bridge should be only 1 pixel wide.

It is also still possible to use short land-bridges (as described here for RTW) by manipulating the coastline in map_heights.tga.

Volcano positions are marked with one red pixel (RGB 255,0,0)

YOU can help us improve this Wiki! ~ Look for ways to help and editing advice. ~ If you need further advice, please post here.
Retrieved from "https://wiki.twcenter.net/index.php?title=Map_features.tga&oldid=67856"
Categories: