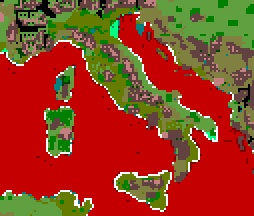 The map_ground_types.tga is the tga that controls both the type of terrain displayed on the campaign map and on the battle map.

Note that the map_ground_types.tga does not determine the amount or shape of sea shown on the campaign map. The coastline shown in map_heights.tga is the one that determines where land and sea are placed, if there is any discrepancy between the files a default ground type is used for the incorrectly designated areas. For instance if an island exists in map_heights.tga but is marked as sea in map_ground_types.tga it will still appear on the campaign map but with a default fertile terrain type.

The following types of terrain are impassible by units.

Use of mountain types effects the way the heights are rendered on the campaign map. Using 'mountains low' gives a smoothing effect and heights will appear lowered. Using 'mountains high' gives a peaked effect making heights appear greater, the .cas model for mountains high also places peaks randomly so they will not necessarily tie up with your highest points.

(For RTW only: Very large areas of impassible terrain can cause the same 'Landmass Crash' problem as having too large a sea area.)

The above are fairly obviously fertile ground types, a small area of fertile ground is needed for each region. The areas of fertile terrain on the campaign map will be displayed with an overlay of a different tga when farms are built in a region, see Visual Effects on Campaign Map.

The different types of sea 'ground type' affect the movement of boats.


In RTW the ocean ground type is impassible by ships and also therefore prevents the spawning of rebel (pirate) ships. For that reason it is best used for small lakes which don't have ports and to block of areas of the map you don't want accessible.

The area between Europe and America in M2TW is the ocean ground type. Only ship types with the ocean_going tag in descr_ship.txt can traverse ocean tiles.

The files used as 'textures' to paint the campaign map when it is rendered are mainly contained in data/terrain/aerial_map/ground_types folder. These files are referenced from descr_aerial_map_ground_types.txt two short excerpt from that file shows how the climate as defined on map_climates.tga and the ground type combine to determine which tga is used.

Each climate type has a separate list of all the ground types below it. Different tga's can be used for the same ground type under each of the different climates. The tga specified for cultivated_low will replace the one used for fertility_low when farms are built in a region, cultivated_medium replaces fertility_medium etc.

YOU can help us improve this Wiki! ~ Look for ways to help and editing advice. ~ If you need further advice, please post here.
Retrieved from "https://wiki.twcenter.net/index.php?title=Map_ground_types.tga&oldid=85858"
Categories: