The mod was started about four years ago. Sb2ean released v2.4 and disappeared after the release. Wherever he is, we wish him well. After that Irishron took the responsibility and carried out the torch further more and kept the mod alive with his hard and relentless efforts. Gigantus was the one that made this fun mod Kingdoms compatible with his supreme modding skills.

Regions Mod is a M2TW and Kingdoms modification that focuses on the entertaining gameplay rather than historical accuracy. This mod has a basis Spurius' BigMap mod. To this the amount of regions available has been maxxed out to 198 including the Americas. It is now 2 turns per year. The map has been modified in favor of AI expansion. And has new religions like Shaman for the Mongols. Regions & Provinces Mod Adds 69 Regions, 7 cultures, 4 religions, Faction Name Changes, Historical name changes, garrison changes , more variety of units, New victory conditions. Currently the the latest version for the mod is v3.80.16.

This mod has 7 new factions that are Ireland, Sweden, Mali, Hedjaz, Armenia, Georgia, and the Cumans surplus with many new and challenging units. 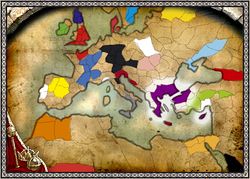 YOU can help us improve this Wiki! ~ Look for ways to help and editing advice. ~ If you need further advice, please post here.
Retrieved from "https://wiki.twcenter.net/index.php?title=Regions_%26_Provinces_Mod&oldid=84124"
Categories: