Total War: Rome - Remastered has been released, the revised game developed by Feral Interactive was launched on 29 April 2021. The Remastered game keeps the same features and style of game-play as the original but includes improved and optimised graphics. Remastered versions of Alexander and Barbarian Invasion are included in the new game.

Rome: Total War is one of the early games in the Total War Series developed by the Creative Assembly.
The game was released in 2004 and is still popular with players and modders, it is now available on Steam as part of the Rome Remastered package. The game covers the period 270BC to AD 14 with a campaign that ranges across Europe, North Africa and the Middle East. 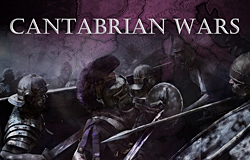 Created by the same author as the award winning Hispania in the Middle Ages for Medieval II, Cantabrian Wars is also set in Hispania and is based around the final stage of the Roman conquest in 29-19BC. The challenge of the campaign is to survive the Roman invasion. Version 0.3 released in April 2018 includes script improvements, re-balanced buildings and resources, and additional custom battle scenarios.

Europa Barbarorum won the favourite mod/submod category in the TWC 2017 Modding Awards for RTW. EB had a 2017 update to version 1.3c for both Alexander and RTW with changes to most aspects of the game. Work on version 1.32, which will include separate versions for Alexander and Barbarian Invasion, was announced in April 2018

Remastered information is currently included in the RTW categories.

RTW: Articles in need of Cleanup

Other Sources for Rome: Total War

YOU can help us improve this Wiki! ~ Look for ways to help and editing advice. ~ If you need further advice, please post here.
Retrieved from "https://wiki.twcenter.net/index.php?title=Rome:_Total_War_Portal&oldid=84945"
Categories: