Rusichi Total War is a very famous mod which mesmerized the TW players when it was released on TWC on 25 August,08. The mod is famous for it's beautiful units and additional aspects given by it but the fact the goal of this mod is not just replace it with graphically superior units over vanilla ones but also to change the playsytle of it by eliminating the monotony of vanilla gameplay.

As we all know the main objective in vanilla grand campaign is to create competition by conquest and expansion, a large number of well-balanced and almost identical factions. In this mod it's entirely different which is why it makes it special here the factions are differing from each other in military and economical structure. Each faction has it's own gamesytle and other variables making this mod unique.

It begins in 1157AD on the birth of Christ (the year of the death of Yuri Dolgoruky) and ends in 1350AD (year of birth of Dmitry Donskoy). Here a single turn is of 6 months and so a player has 386 turns to complete it's victory conditions and historical objectives. 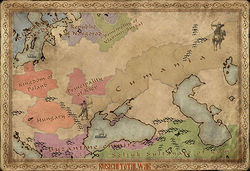 A lot of time and thought went into creating a better map. And not just in terms of the actual map (which is obviusly new): the mod includes a bunch of innovative, game-play-changing features. It contains three big changes namely:-

Here is the Pictorial view of it:-

Here is a sample View:-

Other notable features of this map are as follows:-

In addition to economic and military factors, GP depends on new scripts and "scripted" events, which divide the game into several phases:

Globally, the economy is different in this mod the cost of buildings and their construction time is much larger than vanilla. This part is conceptually different from vanilla. Each of the three fractions have differing construction lines. These differences are based on by different sources of income.

The development of the cities in this mod is a bit harsh and the player has to pay full attention to move ahead in game. Cities and provinces are uneven in the game, there are both city and small villages, and each of them has a limit of development. There are a maximum three cities in the game which serves as the capital of each playable faction. Therefore we can see the game is much more diverse this way making it more intense and fun at the same time. There are places with dense population around the capital, within the Principality and a number of regions between the centers which becomes a whole structure of development.

Items of expenditure will vary depending on war and peace. During the war, players have to keep a large number of princely teams outside the city, it will lead to huge costs and almost complete cessation of the construction. During a war expenditure of the princes will fall to its lowest level, and freed resources will be able to assist a player to build. The game is balanced so that the build up and fight at the same time is impossible.

Units are divided into three categories:

The generals, they are also princes are very expensive, but they have excellent characteristics. In this case, the general's troops are very expensive in the content, but if they are in town, their content becomes free. In every city there can be only one free general. Now the general is a very important unit and the player will have to closely monitor the pedigree and their individual qualities, to avoid the military and economic losses. And a "adopted" general will soon be a traitor or worse yet, will provoke a civil war because of their unwillingness to take a grand table.

This changes the balance of the principles of warfare. Mass unit types are played on the similarity of vanilla. Regional forces differ according to their regions since their characteristics are used to reflect these features. Finally the elite units comprises the backbone of the faction's army and they require constant monitoring and maneuvering. Their timely application in warfare can change the tide of battle. And one more feature: organized resistance in the major parts of the opponent player by dealing with the mobilization of all available units in the principality i.e. actually "collect troops from all over the earth."

Here are a few Awesome Trailers of this mod which are listed below:-

YOU can help us improve this Wiki! ~ Look for Ways to Help and Things to Do. ~ If you need further advice, please post here.
Retrieved from "https://wiki.twcenter.net/index.php?title=Rusichi_Total_World&oldid=81193"
Categories: