The year is 1180 A.D. Chinggis Khan, the man who would come to inherit the lands of the known world from the Pacific to the Mediterranean, has come of age in the steppes of the barren north. A series of military campaigns over the next few decades will set the stage for invasions on a scale that the world has never before born witness to. It is a time of much turbulence throughout the land, with power changing hands and again being consolidated in many of the great nations of Asia.

The Jurchens, who overthrew the Liao and established the Jin Dynasty less than a century prior, have recently signed a treatise of peace with the Han Chinese Song Dynasty to the south. Peace is a curious thing though between civilized folk and non-, and the conniving Chinese ministers may spin an illusive tapestry of lies to surreptitiously invalidate the agreement and plunge the two empires into war once more. In Korea, the nation of Goryeo has recently undergone a coup d'état, and is now under military rule with the King in exile and a figurehead on the throne. War rages in Japan as the Minamoto and the Taira clash for control of the land after the downfall of the Fujiwara Regency and the Heiji Rebellion. Tibet has no central ruler after the death of Langdarma and has dissolved into many squabbling dissident factions. In Indochina, a tentative peace has been signed between the nations of Dai Viet and Champa, which may lead to a combined assault on the Khmer. From the west come the Khitans, seeking the land they lost be returned to them. The continent is in turmoil, and a strong leader could unite all of the nations under his hegemony, if he can stop the raging tide that will come from the north. 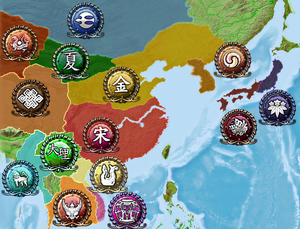 All Under Heaven map

- Rebel factions are largely non-present
- Each faction has many cities
- Map size makes field battles the preferred form of combat, especially in the steppes

- Over 50 new structure models
- Over 100 new agent/general models, including faction leaders and heirs

- Every campaign has different adversities

- Every region has a story to tell
- Some buildings are represented by models on the strategy map, and may even pose as obstacles.

The beginnings of the mod went under the name 'Calm Before the Storm', an overambitious mod project by Augustus Lucifer. At that time the mod was planned to span from the middle east to japan, a vast expanse of land and cultures. The basic idea had been laid, that the TW community needed a mod that incorporated asia and portrayed the mongol invasions from an eastern perspective. That mod would have gone on to fail miserably, due to scope creep and lack of development, were it not for contact with Yelu Dashi.

Yelu, having made Khitan and Mongol units for the popular M2 mod Broken Crescent, and with a background in Chinese culture, was also interested in the period and looking to start a mod based around it. He was the one who first proposed a reduction in scope, which at the time was coupled with a hundred year shift backwards. After some deliberation, Augustus agreed to reduce the scope to 15 factions and a focus on east asia, and Yelu agreed to a time closer to the originally proposed date of 1190. Thus 'All Under Heaven' was born, the name based on the concept of Tianxia, whereby the Chinese Emperor is said to be the ruler of all the lands under heaven.

Since then the mod has released four public previews and is in continual development. Much of the history is yet to be chronicled, due to the unfortunate infrequency of development cycles and the need to view things retrospectively.

All Under Heaven subforum

YOU can help us improve this Wiki! ~ Look for Ways to Help and Things to Do. ~ If you need further advice, please post here.
Retrieved from "https://wiki.twcenter.net/index.php?title=All_Under_Heaven&oldid=79474"
Category: