Descr_daytypes.txt controls the weather and lighting conditions applied to the battle maps for each of the various climates. Which climate the battle takes place in is determined by the originating position on the campaign map and the climate colour used for that location on map_climates.tga. Custom battles occur at pre-set locations on the campaign map as defined in custom_locations.txt

Note: Although a similar file is present in M2TW it is not used by the game and contents can be ignored entirely.

The possible weather conditions are described at the top of the file, for example:

these events are also referenced in descr_sounds_enviro.txt in RTW, how they relate to the possible weather selection criteria in custom battles is not clear yet. The first word of the listing after precipitate appears to reference the sound in descr_sounds_enviro.txt for instance Rain, dust, snow or hail. These can be succeeded with torrential, light or heavy, what that does is not clear yet.

A section start from the vanilla file looks like this:

In order to split up the climates new daytypes may be added so you could have:

note that the daytypes are also referenced in the next_day line, so you would need to change those as well to suit.

The time is set at the beginning of every event on a 24hour clock eg:

where 7 represents 7am in the morning. The times events can be set at are variable, so you can have more or less events. Note that the colours listed for say 7am do not continue to be used until the next event but work on a transition between that event and the next giving variable colours in between. For example you could just have an event at hour 8 with red lighting and an event at hour 12 with blue lighting, then a battle at hour 10 would get mauve lighting as the two settings merged.

It is quite easy to get very strange effects when editing this file, see screenshot of using the night settings throughout daytime:

Lighting effects appear to be combined with some overall settings for the time of day described in descr_skydome.txt and descr_battle_map_lighting_and_fog_control.txt.

The following image is from work in progress during testing for new sky colours for Lycan Rising:

The ambient_colour_increase_proportion sections in descr_battle_map_lighting_and_fog_control.txt also have an influence on the overall effect: 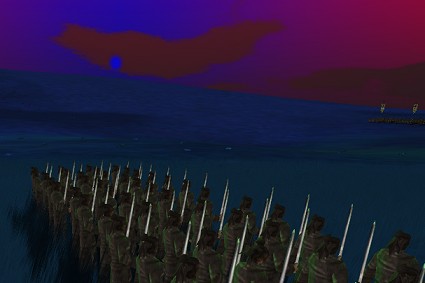 The above image is taken with the same settings as the screen shot above it except for changes to descr_battle_map_lighting_and_fog_control.txt, raising ambient_blue_increase_proportion to 0.9 for general lighting and lowering others, and raising ambient_red_increase_proportion to 0.9 similarly for unit lighting. The effect on the ground lighting is very pronounced with the green of the sunlight removed almost entirely from shadow areas, the effect on unit lighting is less marked but appears to increase the red in shadow areas slightly.

Note that descr_pallete.txt which looks as though it should effect light colours appears to be completely redundant in RTW1.5 and BI1.6

All colours in this file are listed in format like:

Where the first number is the amount of red, the second the amount of green and the third the amount of blue. The maximum level of each colour is achieved by using the value 1 . The game will accept higher values but they do not result in a brighter colour and in some instances can create odd effects.

Each section has a "next day" lookup, with percentage chances of what the next day will be if you choose to wait before going in to battle (eg summer, spring, autumn etc). The lighting effects do not switch entirely to the next day's selection when you opt to wait, see below:

setting the different days sunlight colour to wildly different settings shows how this takes effect, the sunlight colour from the second day does not apply to all the ground level items as usual - instead it only effects the buildings and units!

YOU can help us improve this Wiki! ~ Look for Ways to Help and Things to Do. ~ If you need further advice, please post here.
Retrieved from "https://wiki.twcenter.net/index.php?title=Descr_daytypes.txt&oldid=82335"
Categories: