End of Days: Lycan Rising is a completely independent sequel to End of Days, it is a full conversion modification for Barbarian Invasion 1.6, contained within its own mod folder and with automated installer.

It uses a new campaign map designed specifically for the mod, which includes a wide range of climates and terrain, with areas such as the 'Forbidden Mountains' and 'Cursed Earth'.

All factions have completely new (non-vanilla) unit rosters, including many less humanoid units such as the giant Yargrazil, the winged ancient vampires, and turned Lycans. 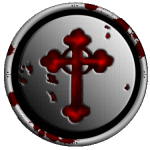 The playable human faction of the mod. The Talamasca (latin; Animal mask) are an order of warriors formed by the late 'Etrigan', mystic and father of 'Kerin', the current leader of the order. Originally formed as an order of mystics, shamans, and watchers, their task was to safeguard humanity from the nightbreed's by giving warning of any possible threat. After the death of Etrigan 'Kerin' swore a blood oath to wage war on those who had for many years hunted man. With vengeance in mind Kerin formed the 'Brethren', a military wing of the Talamasca, made up of trained men at arms and elite knights they form the backbone of his forces. Being no fool Kerin also kept to the orders origins and had his mystics and shamans trained as warriors, none took to the new way of life better than the fearsome Order of Syon... 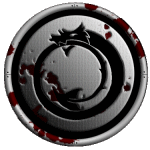 The Severin are the lower caste of the Vampyre world, made up of 'sired' Vampyres they lived under the heel of the pure blood Rahala caste for a hundred years, that is until the insurrection lead by Valfore after he escaped death and was ruled an outcast. The Severin fought a guerrilla war against the Rahala for many years while all the time building new towns and cities far to the north, only when the aged general 'Setis' lead a campaign against them did they fight an open battle, a battle which they lost badly. Fortune though smiled on the Severin as the campaign of 'Setis' coincided with an attack from the Talamasca on the Rahala city of Kemet, forcing 'Setis' to return home. Now under the leadership of the aged Valfore the Severin are ready to forge a new empire... 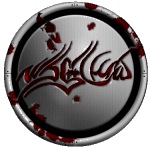 The pure blood Vampyre nation lead are by Akashan, son of Amshur, rumour has it that Akashan was cursed at birth by a Lycan mystic, although as his father had everyone who was there killed these are just rumours...Akashan is a vicious ruler suspected of murdering his own father to seize power, constantly reminded of the glories of the past, of the time before the wars with the Severin and the Talamasca, of the time of the great council (which he also had murdered). Now with their decline in fortunes and years of living with fear, Akashan has urged his people to put all their energies into forming a great nation of warriors, intent on crushing his enemies once and for all. 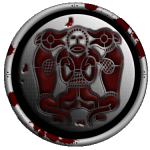 The Lycan nation has been hidden for many years in the forests to the north, mainly runaway slaves of the Rahala, most seized the chance to escape during the war with the Severin and in their hundreds fled across the forbidden mountains, desperate and leaderless they found a small settlement of 'Terani'. The Lycan people are led by the charismatic Lucian, under whose guidance the free Lycan's began to build homes, then villages and towns and for years they lived in peace, but now Lucian has begun to stir old hatreds amongst his people, now Lucian has called them to war.

Rebel nations are comprised of many different distinct groups, including Woodsmen, Desert Dwellers, Soul-Eaters, Druids, Zombies and Ghostmen. It is possible to play as some of these groups in the Year730 Campaign and in custom battles.

The trait and ancillary system has been re-worked to give suitable characteristics for Vampires and Werewolves, as well as the mystic humans. A suggestion thread in the teams hosted forum, (here) raised some interesting ideas.

With traits like "fleas" for the werewolves and "garlic breath" to scare away vampires for the humans; you would be correct in thinking there might be some humour to be found in this mod. 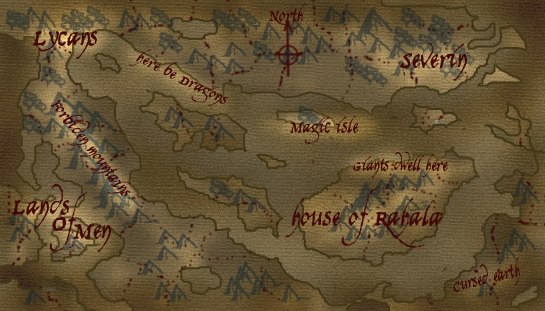 The named areas of the map all have a distinctly different feel to them both on campaign and battle maps, different mercenary and rebel types inhabit the various areas. 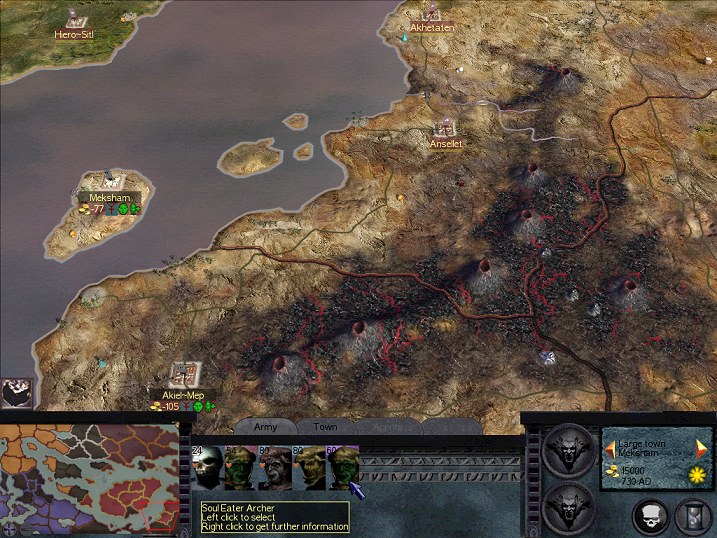 Screen-shot of the 'Cursed Earth' volcanic area including interface.

The battle map for Lycan Rising has substantially revised weather and lighting effects. The volcanic eruptions in the Cursed Earth area have over time dimmed the atmosphere to the extent that the Vampyres may now walk safely during 'day-time'. 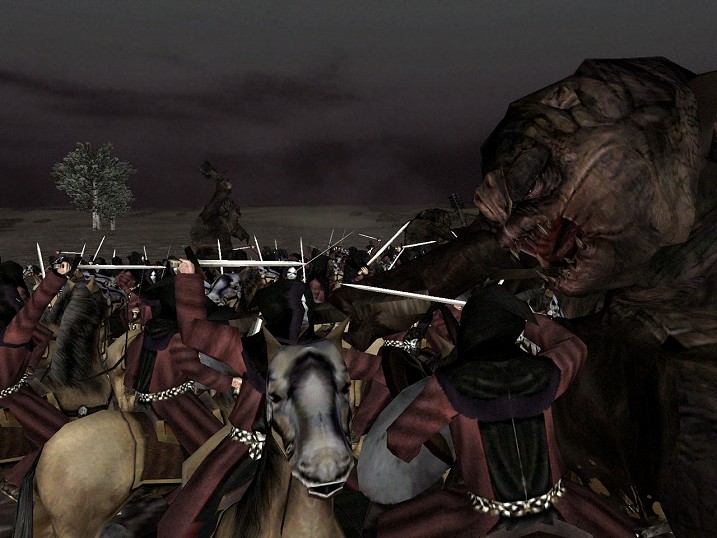 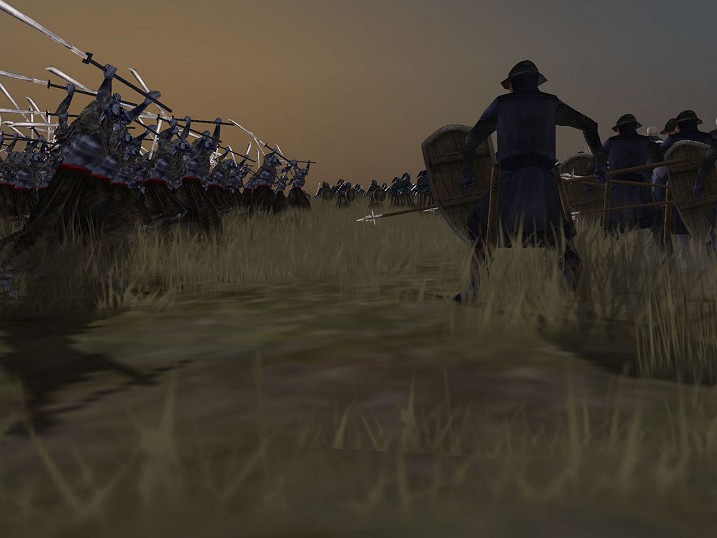 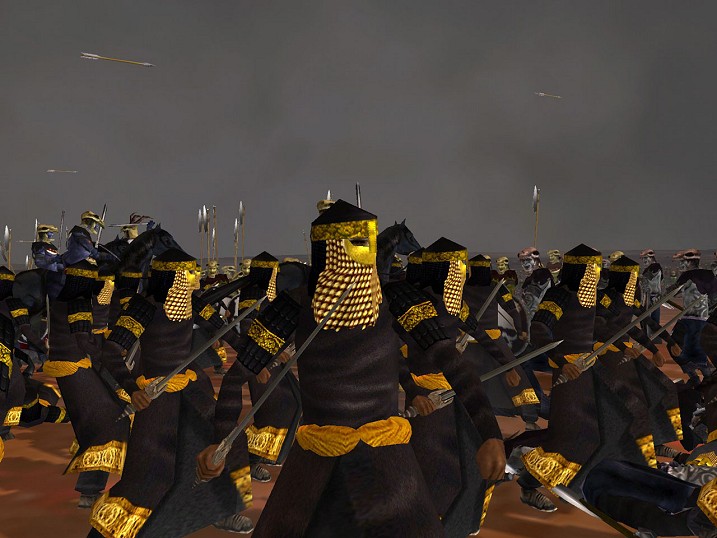 The Rahala's Caitiff in hand to hand fighting with the Soul Eaters, full sized version here

The above shots by Charge had minimal editing and show the darker that normal in-game atmosphere accurately, for more see this post.

The mod is basically a two way split, between inspiration and graphics from Halie, and coding (adding and resolving problems) from Mak.....

YOU can help us improve this Wiki! ~ Look for ways to help and editing advice. ~ If you need further advice, please post here.
Retrieved from "https://wiki.twcenter.net/index.php?title=Lycan_Rising&oldid=84172"
Categories: