Extended Cultures (XC) is a modification of Rome: Total War that aims to bring historical accuracy but also show how different factions could have evolved had history taken a different path, with an eye to fun and challenging gameplay. The mod is similar to vanilla (unmodified) RTW in look and feel, but expands the original by bringing new factions, many reworked and new units, and new buildings. In addition to this, a culture system that makes an unique use of Barbarian Invasion features and a large set of new character traits that extensively helps in role-playing will ensure an unique feeling of diversity for many factions.

Designed to work with RTW 1.5, RTW:BI 1.6, or Alexander. It uses a mod folder so it does not make any changes to the data directory. Extended Cultures sports nine culture specific barracks: Roman, Hellenic, Persian, Arabic, Punic, Nomadic, Thracian, Iberian, and Celto-Germanic. The stable and archery range buildings are no longer primary use buildings and missile and cavalry units are recruited from the barracks. In addition to a factional barracks, each faction can build an auxiliary barracks to recruit local troops in many regions. Another pillar of XC gameplay is the culture system. Developed from BI's religions, every region has a native culture, which may be at odds with your culture, and each faction can build colonies to convert that region to their own culture.

The map is a more accurate map than vanilla and is based on the map of the Extended Greek Mod to an extent, as well as Mundus Magnus. In addition, many new units are added as well as a greater variety of religious buildings.

A new feature of this mod is Advanced Order Control, which is a unique government system. Along with the culture system it allows each region to be shaped towards a full factional control, a protectorate-like system or in some cases a mixed administration. 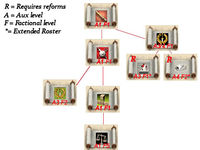 This means that one cannot simply capture a region and leave it at that. The player will have to build up his culture in the captured region, and maybe even migrate settlers from his home land. Hence, building options may vary depending on the level of homeland culture in the city If the opposing faction's culture doesn't vary too much from the player's faction, the governmental infrastructure will not be destroyed and may be retained.

In order to prevent the very large stockpiles of money that are built up by the user faction in the late part of the vanilla game, this mod ties unit upkeep costs to city levels and other things, forcing the player to concentrate on their infrastructure as well as new units in order to support a campaign. Trading is also more important-markets in cities will bring in income but the player must control a trade hub for real money to flow in.

Another feature is the traits and retinues system in this mod, which uses an Ethnic Traits System originally made as a sub-mod for the Extended Greek Mod by Suppanaut. The point of this system is to take the emphasis away from the romans that is present in the vanilla version of the game by incorporating many cultural features and traits for non-roman cultures. From version three of this mod it is only built into Extended Cultures, though previous versions were incorporated into other mods decended from the Extended Greek Mod. This system currently has the following features 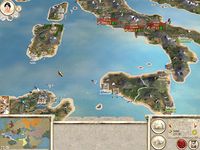 Due mention also to DimeBagHo and to all the people who worked on and contributed to XGM, the mod that formed the base of Extended Cultures as well as the EB team and Redfox for lending us units from EB and DTW respectively. Other thanks go to Ferres and Webba for their units and textures.

Extended Cultures began as an offshoot of the Post-Marian Project for DimeBagHo's XGM, a project that aims to bring new units to XGM along with further use of the Marian Reforms. One idea that was kicked around was upgrading Barbarian building trees post-reforms to allow new buildings, including huge cities. CaesarVincens made some simple changes and released the first version of what would later be named Extended Barbarians, in homage of Dime's mod's name. Around the same time, Zarax suggested expanding the culture system present in XGM. CaesarVincens liked the idea, and made a mock up of it. Combining Extended Barbarians with this new cultural extension, CaesarVincens released the first edition of Extended Cultures on May 4, 2008. Since then, the mod has grown greatly and on January 9, 2009, the Extended Greek Mod-Extended Cultures was released as a full, self-installing mod. Following the release of Extended Cultures 3, Zarax joined full-time providing support, developing the Carthaginian Senate and emerging factions. While Suppanut expanded his work on ethnic traits to better suit the new faction and culture system. XC4 has recently been released and the mod team is going to continue updating the mod even further.

The latest official release of Extended Cultures is XC5 version 1.0.4

YOU can help us improve this Wiki! ~ Look for ways to help and editing advice. ~ If you need further advice, please post here.
Retrieved from "https://wiki.twcenter.net/index.php?title=Extended_Cultures&oldid=84204"
Category: