In Rome: Total War, if the last settlement a faction owned was captured, the faction would be destroyed. In Barbarian Invasion, certain factions now have the ability to up and leave, taking as much of its people with them to find a new home.

This effectively allows the faction to survive, and continue to remain a threat to the player. 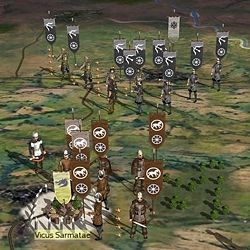 Huns and Vandals on the move.

The time period that Barbarian Invasion covers - 363 AD to 476 AD - is considered by historians to be the first phase of the Migration Period, where various "barbarian" peoples settled in Western Europe. Many would go on to establish lasting kingdoms in the former Roman Empire. There are several different reasons given for the Migration: population pressures, climate change, and, of course, the expansion of the Huns. Hordes in the game represent these great migrations, which laid the foundation of modern Europe. 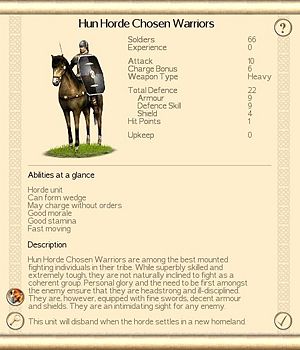 A horde can be formed in three ways:

Factions that are a horde have a wheel on their army banners to show they are on the move. When a horde is formed, many new units are created. Some of these can retrained, but most are "horde" units, identified by a wheel icon in their unit card. They will disband when the horde finds a new homeland. This is crucial, as these units will form a part of the new homeland, decreasing dissent in the new settlement.

There is no army upkeep when playing as a horde, but you cannot retrain units unless you settle down - in which case, a number of horde units will be lost. Mercenaries, however, will need to be paid. You cannot recruit agents, armies or navies as a horde. There is no income as horde - money can only be made by sacking settlements.

When a horde captures a settlement, it can either sack it or settle there. "Sacking" the city results in the deaths of thousands of its citizens, the destruction of many buildings, and a large cash bonus for yourself. The settlement becomes a rebel province. You will have to wait a while to sack the settlement again, because there won't be anything of value.

At this point the faction has reverted to normal, though it can form a horde again if the need arises.

Factions that can form Hordes

YOU can help us improve this Wiki! ~ Look for ways to help and editing advice. ~ If you need further advice, please post here.
Retrieved from "https://wiki.twcenter.net/index.php?title=Hordes&oldid=65439"
Categories: