The designation model_flexi_m allows RTW battle-map unit cas files to use a very limited amount of multi-weighted vertexes. Some vanilla RTW have multi-weighted sections typically on shoulder sections. The older cas loading scripts for 3dsMax do not handle these sections and simply omit them from the model. IWTE will convert this type of cas to dae and allow similar cas files to be created, however the game will only handle a very limited amount of multi-weighting so you could not import a typical M2TW mesh unit with complex weighting directly into RTW! The feature also only works properly in-game if the model is scaled 1.0, strat models that are normally scaled down x0.7 need to be reduced in size so they can be used at 1.0 scale.

The details below also apply to M2TW strat character models, but due to the small visible size and the scaling issue the feature is not useful.

Rome Remastered allows full use of vertexes weighted across two bones at lod0 level with the exception of primary/secondary weapons which can only be assigned to one bone for the entire mesh.

Contrary to popular belief RTW .cas files allow a limited amount of vertexes to be assigned with weighting to two bones per vertex, for more details about the limitation see the Cas Models page. Also contrary to popular belief bone positions can be moved as well as rotated in RTW animations, however, the multi-weighting feature and bone movement do not work well together.

The limit of 100 vertexes in a multi-weighted .cas section appears to be a hard coded limit for RTW, IWTE will currently try and split any such group into separate sections. It is highly recommended that you only attempt to have a few multi-weighted vertexes, such as having a ring of 50/50 weighted vertexes at the Upperarm/Torso junction to smooth out shoulder movement. Cas files with multi-weighting must use the model_flexi_m setting to work in-game. They should work in-game for RTW unit models and for M2TW strat models, however, the .cas models created with this are unlikely to convert/load successfully with any tool other than IWTE currently. Other existing tools do not export the multi-weighted sections from vanilla models. 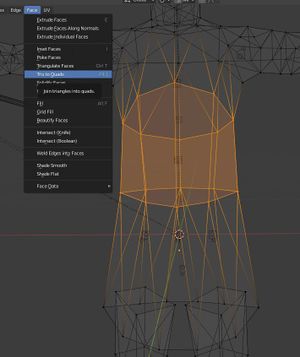 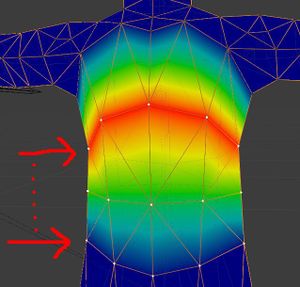 The video here shows some effects of deliberately exaggerated bone movements during animations, where the unit model also has multi-weighted sections. 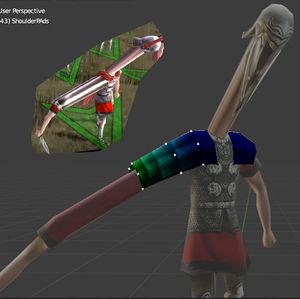 In the above picture the sections of the shoulder pad that are partially weighted to Torso/Upperarm show as stretching evenly between the two bones when the Upperam bone is moved away in Blender. (similarly for the head section which has been partially weighted to the torso) In game although these sections remain at the correct angle all the vertexes with the Upperarm as child bone have moved with it in a way proportional to the original distance between the bones, and not proportional to the new extended distance. The inset in the below picture shows what is effectively happening with the sections partially weighted to the upperarm bone following it and ignoring the extended distance 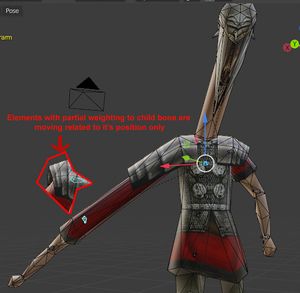 Multi-weighted sections do however behave as expected where the bones are rotated. This poor chap has had his chin and face partially weighted to his torso, as you can see the effect in game is the same as shown in Blender: 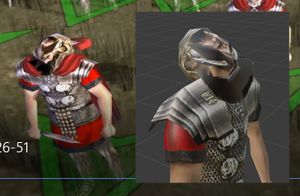 YOU can help us improve this Wiki! ~ Look for ways to help and editing advice. ~ If you need further advice, please post here.
Retrieved from "https://wiki.twcenter.net/index.php?title=Model_flexi_m_in_RTW&oldid=86076"
Categories: