The underlying map structure in Total War: Rome Remastered is exactly the same as for the original game and can still be changed via text file and tga image alterations, however, the visual element of the campaign map is now provided by a separate 3D mesh and textures.

Options for creating a new 3d map mesh include:

It is possible to load a functional map with a non-matched 3D map, however, this will be confusing to the player, and too large an area of additional map, including trees/settlements etc that need placement, without the appropriate heightmap bins generated from the mesh appears to cause an errorless CTD on loading.

Additionally, there is a 2D map overview section, which is displayed with the map fitted to screen size, the base images for it are the feral_map tga files in the campaign folder. The game generates overlays for this map view based on the game state and the functional map (e.g. boundaries are from map_regions.tga)

Any base map that loads under RTW should be capable of loading under RR including using the map.rwm from RTW. For general advice on making a Rome Total War map see the Mapping Index.

The files involved are basically the same as for RTW:

For provincial campaigns, or if desired to have different campaign map to custom battle maps you can copy the base folder files into the campaign folder.

The default descr_strat.txt used for 'remastered' settings has a quantity value specified for each resource, e.g.

which would give you one visible model but 3x the resource value to a merchant. This value is before the x/y coordinates so you need to add 1, here if you only want a single resource.

For hold_regions condition, the Settlement name must be used NOT the Region Name

This is the same as in RTW, in case you've forgotten, you don't need to use a .hgt file the game will generate a map.rwm from just map_heights.tga, but the .hgt file can provided finer detail. However, if your map is the same size as the vanilla map in data/world/maps/base - then you either need your own .hgt file, or you will have to delete the base games' .hgt file - otherwise the game will just use that information instead of your map_heights.tga

The components of the 3D mesh are .cas model files, the image below shows parts from the vanilla map including: the frame; some of the main mesh cas tile pieces; the coastline mesh; and the river mesh (highlighted). 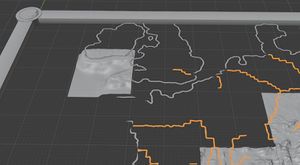 Cas components can be converted to other formats for editing in Blender or 3dsMax, IWTE supports .cas to .dae functions, Feral's CasPacker tool provides .cas to .fbx functions. Please be aware that these may operate at different scales/orientations so use the same tool for import and export.

The main map mesh comprises most of what you see in the 3D campaign map, its components are as follows:

For a mesh to be read from a mod folder some components and the text files must be in:

The pieces are in .cas format the location is specified in descr_map_tiles.txt.

The mesh is formed from these pieces joined together, the pieces should be rectangular and all at the same size. These mesh pieces are not automatically generated by the game so will not correspond with any changes made to the mapping .tga files unless you adapt them.

The vanilla pieces are numbered from 001 starting in the bottom right corner, 013 is in bottom left, 014 above 001 in next row starting on the right etc.

The .bin files are a list of heights relating to each mesh .cas piece in binary format. The location is specified in descr_map_tiles.txt. Typically they are in:

The game generates .bin files based on the height information in the mesh piece .cas files. This data is used to set the height of settlement, tree and resource models on the campaign map, and to set the 'ground level' that armies and agents stand on. Each heightmap .bin file generated comprises 40,401 float values representing height points, no x/y coordinates are given, so it is assumed that these are spread evenly over the cas piece area in a pre-set manner. Feral have confirmed that for the heightmap bin files to work properly all the mesh pieces must be rectangular and of exactly the same size.

Using a data\terrain\campaign\descr_map_tiles.txt file with differently named .cas and .bin files requested than exist either in the original game or mod-folder will trigger the game to write new .bin files, you need to provide the empty /heightmap folder or they can end up being written to your main game folder instead of the mod-folder!

File names and folder locations are specified in descr_map_tiles.txt. The textures do not need to be in separate folders per tile, if they are named with an appropriate system they can be placed in the same folder.

The textures provide individual colour and normal textures for each of the cas pieces, the cas pieces use conventional uv mapping so although the existing textures are mapped as though projected horizontally, you could theoretically alter this. All the land textures with the exception of the farming overlay need to be 'painted' onto each pieces' texture.

The textures used are .dds files, if they are supplied with mip-maps then the game changes which mip-map level it starts at according to the graphics quality settings as shown below. So for the 'low' quality setting with a 2048x 2048 sized dds file with mip-maps you will only ever see the 256 sized map, however closely you try to zoom in. 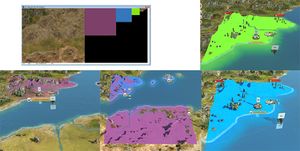 Region boundaries set by map_regions.tga are applied by the engine to the mesh surface partly using the routes/shape of rivers as generated by map_features.tga and using the overlay tile models specified in descr_aerial_map_tile_models.txt.

The farming overlay for fertile land is also applied in areas determined by the game engine.

The coastline model gives the surface used for the waves/surf effect near the shoreline. data\terrain\aerial_map\sea\surf2b.tga.dds gives the colour and alpha effect for the wave but the movement of the wave appears to be hard-coded.

The wave effect will be visible on the coastline model even in areas where it is below the level of the terrain mesh. It is possible to have more than one coastline.cas mesh loaded if more are listed in the text file.

This is the model used to display the rippling water surface of the rivers. It is not automatically generated by the game and will not change to suit your map_features.tga changes. Unfortunately, as the game does still use map_features.tga information to generate the region boundaries (with wide wiggles/bends), it is currently difficult if not impossible to get rivers and boundaries to align exactly. Altering descr_aerial_map_tile_models.txt to force the game to use the simpler 'straight' sections for line elements can reduce the anomaly.

The parts of the river cas model will only be visible if above the level of the terrain mesh.

These operate as in RTW with separate models for trees, resources and settlements, placed either by descr_strat.txt, map_regions.tga or according to ground type.

When you scroll into the campaign map or use the tab button, the game display switches to a 2d view with various overlays, the overlays are generated by the game but you will need a large base map underlying them showing your new map outline, the components are:

NB: These textures need to be placed in mod-folder\data\world\maps\campaign\imperial_campaign\ for BI mods, they are not read from the \barbarian_invasion\ campaign folder.

The 'frame' seen in this view does not use the same textures as your model frame, this view uses parts of the textures in

The mini map visible on the 3D View screen is based on:

YOU can help us improve this Wiki! ~ Look for ways to help and editing advice. ~ If you need further advice, please post here.
Retrieved from "https://wiki.twcenter.net/index.php?title=Creating_New_Campaign_Map_in_Rome_Remastered&oldid=86236"
Category: