IWTE stands for Integrated World Terrain Editor, the tool is developed and maintained by wilddog. It has been the major tool used for modifying battlemap buildings and environments in M2TW.

The tool's early development for settlements was based partly on prior research and development by Argantonio and KnightErrant.

IWTE has expanded over the years to handle more aspects of M2TW modding and RTW modding and now handles animations and unit models, the export/import process has also been expanded to cover Blender and 3dsMax as well as Milkshape.

IWTE is supplied as an executable only file so does not require a python installation.

The following list is a quick round-up of its current capabilities for M2TW:

Editing and creation of new wall, gate and tower animations.

Editing of residences, trees, resources in Milkshape/Blender/Max. Editing of animated character .cas models (via Blender/Max only), includes the ability to chain animations together, edit and save back to separate anims.

Editing of skydome mesh and banners. Editing of .mesh unit/siege models whilst merged to .cas skeleton and chained anims. Animation editing including use of animated bone_weapon groups. (via Blender/Max only)

For siege engines, editing by conversion to .txt and back.

Supports simple editing of the stratmap TGA and HGT files with files shown at correct relative sizes. This also shows a 3d view of the strat map being edited as well as selection of different colour schemes for the heights HGT map.

A simple painting process editor which supports basic editing of several file types (terrain masks can be edited shown at actual size in relation to settlement).

For RTW and Remastered

Supports simple editing of the stratmap TGA and HGT files with files shown at correct relative sizes. This also shows a 3d view of the strat map being edited as well as selection of different colour schemes for the heights HGT map.

Launch the IWTE.exe file - when the tool opens make sure the 'WorldFiles' tab is selected; 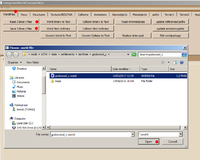 Select 'Read 3 Binary Files'. Choose the .world, .worldcollision & .animinstances files to open when prompted, and then select a save name for the new .world. Note; this IWTE function will not overwrite the original files, it will add _1 to the file names.

As well as the main window IWTE will open a command window as above. Do not attempt to type commands into this window! Do keep an eye on the contents and watch out for any warning or error messages.

When you've finished making the changes you want, select 'Save 3 Binary Files'. Find your new files and re-name them so they are used instead of the original files.

Although some changes (techtrees and textures for example) only affect the .world file, it is good practice to always swap in all three new files, so they have the same time/date and are easily identified as belonging to the correct set.

Object numbers are displayed in small print on the 2d view when in "Assign Perimeters" mode, accessed from the "Gameobjects" tab.

Access the painter process by selecting the button at the top left and then select from the drop-down menus as shown in the picture below: 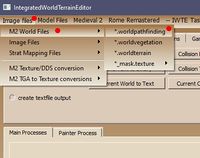 This function can be used to edit the following files whilst matched against a view of the structures of the .world files;

Those files can be opened in the painter process at the same time and the opacity values adjusted so you can see the terrain through the pathfinding etc.

The plaza, which is the area which has to be controlled to win a settlement or fort battle, can be repositioned and re-sized with IWTE. Use the "Gameobjects" tab, "View Plaza" button, then "Change Plaza". To see its relationship to other features use the main "Views" tab or painter process. From Jan2020 IWTE allows both x and y sizes of the plaza to be changed independently to allow rectangular shapes. The 2D view now shows the nominal size of the plaza (30x30m in the example shown) and also an outer line indicating approximately where the flags will appear, which is approximately 1/3rd of the nominal size outside the nominal plaza size. 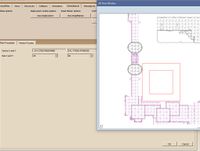 Some functions of IWTE v20_09+ are controlled via text files, the text files need to be named *_task.txt. The function is accessed from IWTE Task in the top menu bar, then select your pre-written task file from "Select Task File"

Current functions include the ability to change the names of bones within a set of .cas files, and the ability to merge unit and strat cas and mesh files with .cas animations, edit in Blender and split back into component animations.

YOU can help us improve this Wiki! ~ Look for ways to help and editing advice. ~ If you need further advice, please post here.
Retrieved from "https://wiki.twcenter.net/index.php?title=IWTE&oldid=85555"
Categories: