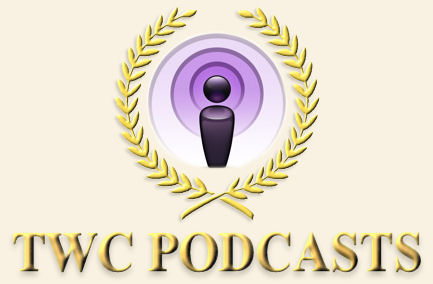 A logo created for the TWC Podcasts by Spiff

The Total War Center Podcast is an audio broadcast, originally started by Evariste, that focuses on matters important to the Total War Center community. It has included interviews with staff members, modders Creative Assembly staff. It has also run competitions and hosted debates between members.

Hosted by Evariste, mod spotlight by Zuwxiv, History run-down by Spiff, Curial overview by the Black Prince and special interview with Lusted, The Modding Moderator. Special thanks to Lord Tomyris for musical input. (TWC Link)

Hosted by Evariste. With me in the studio today is Cpl. Hicks with a run-through of the History fourm, The Black Prince with his patented Curial segment, and Necrobrit with a mod preview of Ran No Jidai. All of this is in addition to the overview of the common and Total War community that you know and love. Also, thanks to Lord Tomyris and friend Slodge for that fantastic theme music. (TWC Link)

Hosted by Evariste. Arriving just a tad later than usual, the next episode of the podcast is finally out! This edition is bursting at the seams with content, including a round table debate with Ferrets54, Rush Limbaugh, Silver Guard and Shyam Popat. Up first is part three in our five part series of Creative Assembly Developer interviews.(TWC Link)

Hosted by the Black Prince. Arriving slightly later than estimated, this week witness and delight in a CC rundown by El Guapo, an interview with Lusted and an exclusive feature on M2TW and much much more. (TWC Link)

the never before heard voice of the Grim Squeaker

all the news from about the community

a 10 minute interview on M2TW with Creative Assembly! (TWC Link)

edited by the Black Prince! Music provided by Justin Durban and Her Majesty's Band of the Royal Marines (TWC Link)

The Podcast begins with a mouthwatering round table discussion/preview of Medieval 2: Total War. I sit down with Lord Rahl and Corporal Hicks to discuss some of the things that we've seen, what we'd like to see, and what remains to be seen. Next up, Rez delivers an absolutely delectable summary of what the wizards over at the Rise of Persia mod are doing in our mod spotlight. Of course, it wouldn't be a Total War Center Podcast without the Black Prince, and he provides a fantastic rundown of Curial matters. Last, but certainly not least, I sit down in the studio for a one-on-one interview with Katrina. We cover almost every topic of interest, from her unique perspective on various TWC matters to her rather unique situation as a female member of the Total War Center.(TWC Link)

As this is not a normal podcast, a few things have changed. Instead of finding the usual Common Community, Mod Spotlight segments, among others, you'll find two meaty chunks. First up is something special: An introduction and general guide to the Total War Center for members new and old. Since the release of Medieval 2, TWC has witnessed a surge of new members. To help ease them in the the community, Lusted and I go over some helpful hints and commonly asked questions. For the veterans among us, this should still be useful as a refresher.

Next up is another exclusive interview with Lusted, Strategos and modder extraordinaire. He recently got a chance to visit Sega Europe's studios to play the game before its release to the general public. We talk all things Medieval in this fantastic interview. (TWC Link)

Yes, after some minor delays the second of two special podcasts based around Medieval 2: Total War has been released. As this is not a normal podcast, a few things have changed. Instead of finding the usual Common Community, Mod Spotlight segments, among others, we'll get right to the main event, an exclusive round table discussion between Lusted, lawngnome, and myself about our initial impressions of Medieval 2: Total War. You'll not want to miss our comprehensive rundown! (TWC Link)

After many weeks, a new podcast released. In this episode Grimsta gives a rundown of Medieval 2 modding, and the Black Prince discusses in his segment about his performance in the Curia. Rounding it off is an interview with gigagaia, the (ex) Head of Content to conclude the podcast. (TWC Link)

Not actually an official Total War Center podcast, hence the name "Not the Total War Podcast" but more of a side-story. Hosted by Evariste and featuring Justinian, this episode was more of a discussion between the two members rather than focusing on specific topics in the TWC universe. ([1])

After June 25, 2007 the Total War Center Podcast seemed to be on hold, as activity within the forum among both viewers and contributors fell to a complete stand still with over an entire year of time between episode fourteen and the four threads above it in what is now the archives. However, on October 12, 2008 the concept is resurrected by Belisarius and the Black Prince in their episode of the "Total War Center News Service" (TWCNS) in which they offer a preview to ETW. (TWC Link)

Directed by the Black Prince, edited by Tenhauser and starring Pøntifex, this episode of the podcast provides information on the new Roma Surrectum 2 modification that is in production. (TWC Link)

Featuring the Black Prince and Pøntifex again, the two have a crack at ETW by playing two land battles and one naval battle. The Podcast features clear descriptions of the situation along with a fair bit of humourous dialog. (TWC Link)

Starring Pøntifex, JrdBnta and Legio, edited and directed by the Black Prince. This podcast involves the three discussing all about moderation and their viewpoints on the subject. Includes quite a bit of humourous dialog and a fair bit of expletives which are censored. (TWC Link)

Directed by the Black Prince, Edited by Capt. Fozdike, And Featuring a star-studded lineup consisting of DekuTrash, Leonidas the Lion, Frederich Barbarosa. This episode, the boys get their teeth stuck into NTW in an in depth overview of the game by people who don't even own the game. But there are still some semi-intelligent comments so it's worth a listen! (TWC Link)

Directed by the Black Prince, Edited by Capt. Fozdike, and featuring... Capt. Fozdike and Scorch! This Episode, The Foz forces Scorch to be interviewed and they talk about the old times of TWC. The interview consists of some of the things that Scorch liked about Moderation and what he's up to now on TWC. For a change there are no expletives in this Episode. (TWC Link)

Directed by someone, Edited by Pontifex Maximus, and featuring Legio, Mega Tortas, and Pøntifex. This round the boys and girl (Legio) get right into having a look at the new Total War game, Shogun 2 and have a quick look at some of the features in the up and coming game.

YOU can help us improve this Wiki! ~ Look for ways to help and editing advice. ~ If you need further advice, please post here.
Retrieved from "https://wiki.twcenter.net/index.php?title=Podcast&oldid=85343"
Categories: