The Papal States is a non-playable faction in Medieval II: Total War. Historically the Papal States was one of the major Italian states, until the Unification of Italy in 1861. The head of the States is always the Pope, who leads "God's Armies" into battle, and governs the only Papal city in the game, Rome. Players can easily modify the descr_strat file to make them playable, but further modifications are needed to allow them to call Crusades properly. They are similar to the Senate of Rome Total War in that they are not meant to be played, and because gameplay may be buggy. 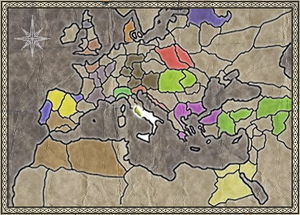 They start in the middle of the Italian Peninsula.

The Papal States is different from all the other factions. For starters, they have no family tree at all. Their faction leader is the Pope, who cannot marry. When the Pope dies all the Cardinals elect the next Pope. The Papal States can still get generals through adoptions and Man of the Hour the same way other factions can, but these generals will never become Faction Heir or Leader.

Another interesting thing about the Papal States is that they still have a relationship with the Pope like all factions. Very often the Pope does not like the Papal States very much! For this reason, you cannot always call Crusades as you please, you need high Papal Approval just like everyone else. Without modifying the game the relationship with the Pope seems to be stuck at a low level, which means you have to wait for someone else to call a Crusade. Normal methods to increase your standing with the Pope, such as building priests and churches, converting other religions, participating in Crusades, and listening to Papal Missions does not seem to work. The Papal States can never be Excommunicated.

The Papal States faction also controls Inquisitors. These Agents spawn in Catholic ruled regions with heresy. They increase conversion but also increase Unrest, and can denounce anyone who is not part of the Papal States, even generals. Characters with high Piety are harder to Denounce, and Inquisitors with more Piety are more effective. If the player does not give Inquisitors orders they act on their own, looking for heretics and other blasphemous individuals to denounce. They disband once heresy is no longer an issue, or after 3 successes or failures.

The Papal States are never completely destroyed. Unlike any playable faction, the Papal States survive losing their last region. They also get a continuous stream of Popes from Papal Elections. The player could only 'lose' if all Catholic factions are destroyed, and they have no regions, armies, or characters. Even at that point the Papal States still exist technically but they won't rise up again.

Other than these differences, the Papal States function exactly the same as any other Catholic faction.

The Papal States army functions mostly like a generic Italian faction. This means they have some very strong Militia units, especially in the Early Game. They also get some unique and very powerful Infantry from cities with a Stone Wall or higher, this gives them an enormous Military advantage. Like the other Italians, their elite Swordmen and Cavalry is a little lackluster, although it is well armoured and cheap. The Papal States is similar to Milan in that it can build a strong army without Castles. 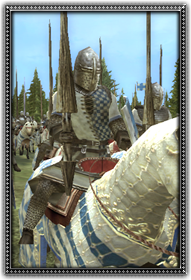 YOU can help us improve this Wiki! ~ Look for Ways to Help and Things to Do. ~ If you need further advice, please post here.
Retrieved from "https://wiki.twcenter.net/index.php?title=Papal_States_(M2TW_Faction)&oldid=83664"
Category: