The Sicilians begin with two provinces under their control with a castle at its capital in Palermo and a large town at Naples. The kingdom is surrounded by Italians and the Holy Roman Empire to the North, the Byzantines to the East and the Moors to the South. 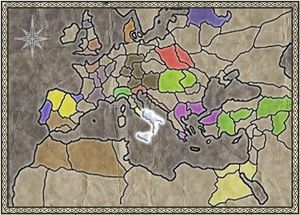 Sicily start with the original Island of Sicily (which in Rome: Total War is split between the Carthage, The House of Scipii and The Greek Cities) and Southern Italy.

YOU can help us improve this Wiki! ~ Look for Ways to Help and Things to Do. ~ If you need further advice, please post here.
Retrieved from "https://wiki.twcenter.net/index.php?title=Sicily_(M2TW_Faction)&oldid=23323"
Categories: