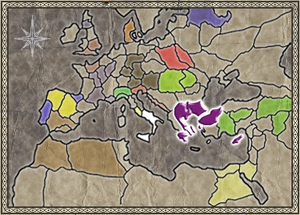 The Byzantine Empire controls land in eastern Greece and north-west Asia Minor. It is surrounded by the Turks to the East, Venice to the West, Hungary to the North and Egypt to the South. It also has a settlement on Cyprus which is located near the Holy lands.

Strengths: Very rich empire with the possibilities of getting even richer by controlling the Black Sea and surrounds. Very strong Horse archers and infantry in all periods. Very rich starting territories with rich surrounding rebel territories aswell. Very easy to link all your cities with trade. Uniquely positioned to control all faction traffic from the West going into the East and vice versa. Easy access to the rich holy lands, meaning your empire will only become more wealthy.

Weaknesses: Very limited once other factions reach the late period. No access to gunpowder. Every faction wants a piece of your rich rich lands, meaning you are likely to be attacked considerably. Shares borders with the Turks, a faction that will want you dead. Also prone to some Italian aggression from the West as Venice and Sicily expand Eastward.

Conclusion: The Byzantines are arguably the hardest faction to play. While they will not struggle to keep up with the other factions in the early and high periods they will fall greatly behind in the late period, due to having no access to the advanced technologies being discovered at that time. Your empire is very centrally located and all the factions will want to come through your lands for various reasons, a wise Emperor will let friendly and neutral factions pass through and hold your enemies to ransom at a crossroad. The Byzantines will have to deal with the Turks, preferably very early on, for if the Turks are allowed to advance and grow the task of destroying them will become that much more difficult. The Italian factions will also need to be pacified to a certain degree as they make their way East. It would not be wise for the Emperor to fight a war on two opposing fronts of his empire, lest he surely fail. Once the Turks have been dealt with, the Emperor should be free to deal with the menacing Italians and eventually the Mongol hordes that come from the East.

YOU can help us improve this Wiki! ~ Look for Ways to Help and Things to Do. ~ If you need further advice, please post here.
Retrieved from "https://wiki.twcenter.net/index.php?title=Byzantine_Empire_(M2TW_Faction)&oldid=61945"
Category: