From TWC Wiki
(Redirected from Mongols)
Jump to navigationJump to search

The Mongols are a non-playable emergent faction in Medieval 2: Total War. Several Mongol armies consisting mainly of elite units lead by experienced generals emerge in one of the furthest eastern provinces (namely Sarkel, Bulgar, Tibilsi, Yeravan or Baghdad) around the year 1214. A few turns earlier (5 turns), their arrival will be announced via a message. 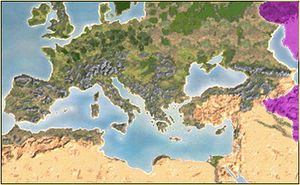 Where the Mongols enter the game.

The Mongols do not have a starting position as they are an emergent faction which is not present at the beginning of the game. The Mongol horde will either appear north or south of Caspian Sea, at the east border of the map. They come in 3 waves, the first one of 5 and the 2 others of 4 armies.

5 turns before they come, a message indicates that they are coming. If you play an eastern faction, you should use these turns to strongly reinforce your armies and your defences.

The most western factions (England, France, Spain...) are less menaced so if you didn't expand yourself in the Holy Lands or near Black Sea you can ignore Mongols, several eastern factions (Holy Empire...) can be used as a shield. 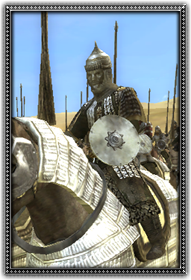 YOU can help us improve this Wiki! ~ Look for Ways to Help and Things to Do. ~ If you need further advice, please post here.
Retrieved from "https://wiki.twcenter.net/index.php?title=Mongols_(M2TW_Faction)&oldid=50051"
Category: