From TWC Wiki
(Redirected from Timurids)
Jump to navigationJump to search

The Timurids are one of the two nomad factions that appear near the start of late period, near 1365. They will appear just east of the Holy Land, so if you own any territory there it would be a good idea to reinforce it heavily, and preferably, long before they come. Since the Timurids are supposed to be the successors to the Mongols, they have pretty much the same agenda. They will ruthlessly assault any settlements in range, and afterwards most probably Exterminate the populace.

The Timurids don’t start the from the beginning of a campaign, as they are an emerging faction.

They emerge from the South East side of the map similar to the Mongols, they are also stronger. Like the Mongols, as they emerge at the east border of the map, the first menaced factions are the Turks, Russia, and of course the Mongols if they spawned at the same side of Caspian Sea as the Timurids.

A few turns before their arrival a message alerts you that a threat comes from the East. Althought for the Mongols they come 5 turns after the message, the Timurids come only 2 turns after the message, so, if you play an eastern faction (Turks, Byzantine or Russia for the most menaced) you'll have less time to reinforce your armies, if you didn't expect Timurids to come.

They don’t have any Victory Conditions as you can’t play with them (in vanilla). 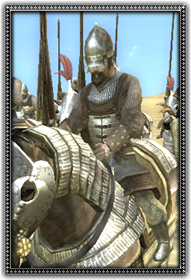 YOU can help us improve this Wiki! ~ Look for Ways to Help and Things to Do. ~ If you need further advice, please post here.
Retrieved from "https://wiki.twcenter.net/index.php?title=Timurids_(M2TW_Faction)&oldid=64074"
Category: