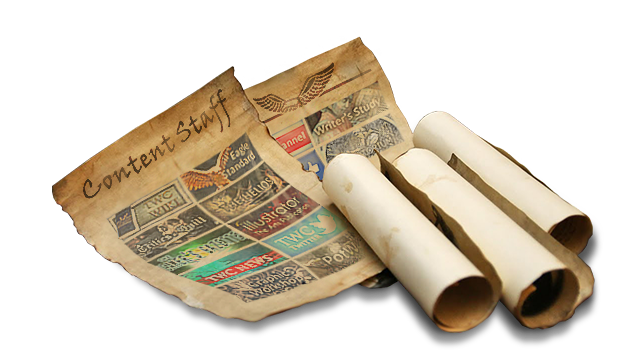 The Total War Center's Content Staff is responsible for writing articles and producing valuable content for the site in general. It is divided into several branches, each of which is presided over by a Content Director.

Content Staff (Content Writers) are members who write articles for the Site Publications, produce front page announcements for the News Team, look after the Downloads section, or regularly contribute to the TWC Wiki. The full list of the Content Staff can be found here.

Articles and reviews relating to Total War games and mods are published by the Eagle Standard.

The Gamer's Gazette does what the Eagle Standard does, but for non-Total War games and mods.

Articles and reviews relating to history are published by the Helios.

Librarians look around the forums in search of good articles, worthy of submission to The Scriptorium. They discuss the functioning of the Library and administer the Scriptorium Writing Competitions.

The Wiki Team expand and update the TWC Wiki and encourage TWC members to participate in editing the Wiki.

Writers' Study Staff run competitions in the Writers' Study and write articles relating to creative writing and AARs for the Critic's Quill.

Those who are Content Emeritus are former Content Staffers (usually former Content Directors) who have left office but are kept around in staff for advisory type roles.

YOU can help us improve this Wiki! ~ Look for ways to help and editing advice. ~ If you need further advice, please post here.
Retrieved from "https://wiki.twcenter.net/index.php?title=Content_Staff&oldid=86203"
Category: