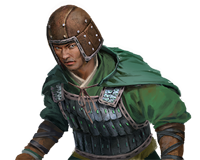 The Champion character type is part of the Wood Wu Xing elemental phase. They are portrayed with a green theme to their clothing.

The Champion's main attribute is Resolve, high Resolve increases the size of the general's bodyguard and increases population growth in an administered commandery. The Champion's specialist skills and recruitment options favour Spearmen.

Champions' satisfaction faction-wide can be improved by the following reforms:

YOU can help us improve this Wiki! ~ Look for Ways to Help and Things to Do. ~ If you need further advice, please post here.
Retrieved from "https://wiki.twcenter.net/index.php?title=Champion_(TW3K_Character_Type)&oldid=79187"
Category: