Egypt (جمهورية مصر العربية) is one of the playable factions in Rome: Total War. They can be played after successfully completing a campaign as a Roman faction or by simple modifications to the game files (more information on which can be found here).

Egypt is located in North-Eastern Africa, as well as holding some settlements around the Mediterranean, in Judea and Cyprus.

At the start of the game, it holds the following cities: 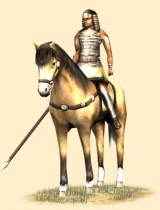 Egypt is a fairly well rounded jack of all trades faction. They have a number of decent infantry choices, most of them fight in Phalanx formation but they also have a light Axe and Shield unit that is more mobile. They have the typical early game archers but later on get Pharaoh's Bowmen, an excellent long ranged choice. They get some decent light cavalry choices, and a number of Chariot units that are among the best in the game. Their non-chariot cavalry are not impressive in the late game, but overall Egypt has a good roster.

Egypt starts the campaign with all of Egypt in its control, along with Jerusalem,Cyprus(Salamis),and Sidon. Egypt should first take Petra and Bostra, due to the fact they are meagerly defended rebel settelemants. It could also be advantagous to gather a force and take Halcarnassus in Asia Minor. Once you obtain the money, you should buy Siwa from the Numidians(if it hasn't already rebelled against them). You will come under attack first from the Seleucids, so you should keep a strong garrison in Sidon and Jerusalem.

YOU can help us improve this Wiki! ~ Look for Ways to Help and Things to Do. ~ If you need further advice, please post here.
Retrieved from "https://wiki.twcenter.net/index.php?title=Egypt_(RTW_Faction)&oldid=83228"
Category: