Parthia are one of the playable factions in Rome: Total War. They can be played after successfully completing a campaign as a Roman faction or by simple modifications to the game files (more information on which can be found here).

Parthia has nearby rebels to conquer and three immediate factions to contend with: Scythia, Armenia, and the Seleucid Empire. 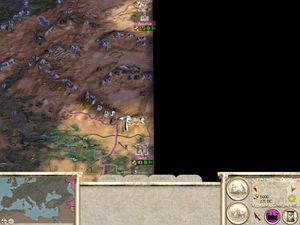 Parthia starts at the far eastern edge of the map in and around Asia Minor. 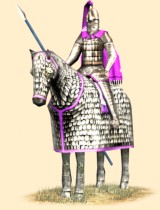 Parthia is a completely cavalry focused faction. A Parthian field army should either be entirely cavalry or include Infantry only as bait or fodder. They have very strong horse archers, including Persian Cavalry, a long range Horse Archer that can also fight in melee. They also have the unmatched Cataphract heavy cavalry as well as War Elephants and Cataphract Camels, who all have a brutal charge and should crush any opposing cavalry force. Their foot archers are average, making them often unnecessary, and their Melee infantry is terrible; the worst in Rome Total War by a longshot.

Persian Cavalry: Can be recruited from Cavalry Stables. Persian cavalry are very useful, namely if they use cantribian circle. Cantabrian circle allows them to move while shooting, making them more effective versus foot archers as they take less hits.

War Elephants: Can be recruited from Elite Cavalry Stables. These troops provide your army with shockpower you can place these elefants behind eastern infantry(if facing romans the enemy roman player thinks eastern infantry? against my Urbans easy kills he charges his urbans in maybe he has only cohorts and cav no archers or onagers)

Now what you do now is send your elephants right through your own eastern infantry and into the Urban Cohort.

At the same time you smash the enemy cav with your own cav by attacking from all sides remember this:Battles are about Routing units you dont have to kill them 1 by 1 Kill them all once they are all runinng so that you dont lose troops durning the slow process of annahilating enemy army.

Cataphract Camels: Can be recruited from Royal Cavalry Stables. These units are simply cataphracts who have exchanged their horse mounts for camels. Camels scare horses, making them extremely effective in attacking and destroying enemy cavalry units, particularly slower heavy cavalry, as Cataphract camels still have the Armor-piercing mace attack, the alternate attack for Cataphracts. However, as camels are slower than horses and the extensive amount of armor on this unit makes it tire quite easily, most cavalry will be able to easily outmanuever this unit.

Eastern infantry:These infantry units can be recruited very early in the game and are extremely cheap, with 240 men on Huge unit size, making Eastern Infantry quite good infantry-of-the-line units early on in the game; however, they are very weak when compared to other factions' early-game infantry, and so should generally be used as a cheap cannon-fodder unit once cataphracts become available.

Archers: Mobile and has a decent punch; unarmoured, this unit is not the best but it is good enough as a missile unit if the enemy archers are eliminated early on in battle. These are the only long-range foot missiles that Parthia can recruit, and so unless horsearchers are used, Parthia is easily outclassed in missile duels between factions with better archers.

Onagers:This unit counters testudo very effectivly in campaign; flaming missiles are ideal aganst packed enemy units and very useful in forcing the enemy into all out attacks or making him or her thin out his or her line. However, by all accounts, artillery is very expensive and almost comletely useless in multiplayer, so it is advised to not get too used to using these units.

Cataphract:Cataphracts are the decisive arm in Parthia's arsenal; it is this one unit, coupled with horsearchers that makes Parthia so deadly in multiplayer as a skirmish army. Cataphracts are the most powerful heavy cavalry units in the game. To make full use of these units, use their unique alternate attack; an armor-piercing mace attack , used by pressing and holdind down the Alt key on your keyboard and right-clicking the enemy unit that you wish to use this attack on.

Cataphracts have so much armor that a shield is not needed to ward off missiles, and since they have a charge value of 9, they should be the main attack arm of your multiplayer and campaign armies. Note that cataphracts are more mobile than camels but do not scare horses.

Parthia Strategies at The Org

YOU can help us improve this Wiki! ~ Look for Ways to Help and Things to Do. ~ If you need further advice, please post here.
Retrieved from "https://wiki.twcenter.net/index.php?title=Parthia_(RTW_Faction)&oldid=83189"
Category: