From TWC Wiki
(Redirected from RTW)
Jump to navigationJump to search

Rome: Total War (sometimes abbreviated as RTW) is a strategy game in the Total War Series which combines a turn-based campaign map with real time battles. The game was developed by the Creative Assembly and was released on September 22, 2004.

In 2021, the original Rome: Total War was withdrawn from sale on Steam. It is now bundled with Total War: Rome - Remastered, developed by Feral Interactive and launched on 29 April 2021. The Remaster changed the user interface, heavily updated the campaign map, fixed various bugs, added new modding resources and backported a few of Medieval 2's features, including Merchants. See the dedicated page for a more complete overview. 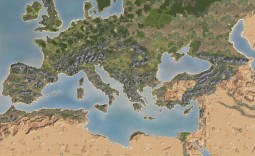 A radar map of the Imperial Campaign's map

The Imperial Campaign starts in 270 BC and ends in 14 AD. Each year consists of two turns. The player controls one of the playable factions on the campaign map with the goal of conquering new regions in order to achieve victory. They can build various structures, expand their cities and move around characters. When the armies of two factions meet each other, they will engage in battle. The player can choose between auto-resolving the battle and fighting it themselves on the 3D battle map.

Rome: Total War's Imperial Campaign map includes Europe, the Mediterranean Sea, parts of North Africa and the Middle East. The campaign map offers many different features. Along with various locations such as settlements and ports there are also several different campaign map characters. Amongst those are generals, captains, diplomats, spies and assassins. The settlements and characters are controlled by the different factions which fight against each other in order to achieve supremacy. Each faction can only see areas which its characters have scouted and regions which are out of sight are covered by the Fog of War, though new information may be negotiated from other factions through diplomacy. Movement around the campaign map is different from earlier games, giving characters more detailed movement than the previous "Risk-style" system.

In Rome: Total War there are 21 factions, 20 of which can be made playable, and the slave/rebel faction. The three 'Roman Houses' (Julii, Brutii and Scipii) are playable from the beginning of the game. The three playable Roman factions are allied to each other and the Senate.The Senate issues missions to each of the Roman factions, successful completion of Senate missions improves your family's standing with the Senate, while military successes and expansion increase your prestige in the eyes of the masses. A high popularity level is necessary to be able to initiate a civil war against one of the other Roman factions.

The rest of the playable factions can be unlocked either by finishing the short or long campaign with any of the originally playable factions or by editing descr_strat.txt in your Rome: Total War directory (more information on which can be found on this page). It is also possible to unlock the factions that aren't considered 'playable' by the game through the manipulation of the same text file. It should also be noted that destroying any 'playable' faction in the Imperial Campaign that currently isn't unlocked will result in it being unlocked.

The factions are divided by the game files into cultures as follows:

In RTW Multiplayer Communities, the term Skirmish Faction refers to a Faction that is weak in pitched battles but is strong on hit-and-run attacks. Brittania, Dacia, Egypt, Gaul, Germania, Parthia, and Scythia fit the definition of Skirmish Faction as their Unit Rosters contain fast units such as cavalry and chariots but no heavy infantry. As a result, they are weak and can be difficult to use in competitive gameplay against stronger factions with heavy infantry such as Rome, The Greek Cities, and Macedon. 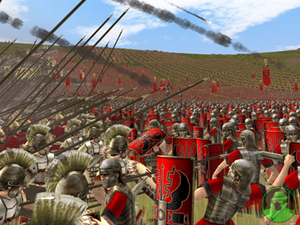 Screenshot of large battle in RTW

Various criticisms have been levelled at the game in regards to historical inaccuracies. The splitting of Roman territory into that of the Senate and then those of three families is somewhat ahistorical, as is the simplification of Roman politics, a mechanism which has been removed from many mods of the game in order to introduce a greater variety of factions. The treatment of the Greek Cities as one unified body, governed from Sparta, as well as the arming of hoplite units with long pikes, makes the Greeks a rather inaccurately represented faction. Other inaccuracies include the large and unified territories of many barbarian tribes, much like the Greeks, and the fielding of Bronze Age Egyptian troops rather than those of the Ptolemaic era.

A major difference between Rome and earlier games in the Total War Series is the way the in campaign battle maps are generated. From Rome onwards, the battle map is generated to match the area of terrain where the armies are actually located, including the adjacent mountains, rivers, forests and settlements. This allows a greater level of strategy in planning battles to suit the armies involved, as well as plan ambushes in forested terrain.

Movement around the campaign map is different from earlier games. Instead of moving 'Risk' style from one region to another, armies and characters on the map have a certain amount of "movement points" which determine how far they can travel per turn, depending on the type of troops and any effects of the commander. Terrain also varies the possible extent of movement, with forests and hills slowing travel while roads increase speed when they are developed.

YOU can help us improve this Wiki! ~ Look for ways to help and editing advice. ~ If you need further advice, please post here.
Retrieved from "https://wiki.twcenter.net/index.php?title=Rome:_Total_War&oldid=85434"
Categories: