England in M2TW Kingdoms are quite similar to the English Faction in M2TW.

In Kingdoms they are destined to be a dominant force in the game. 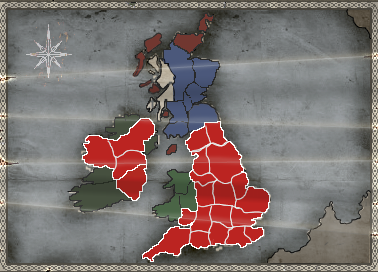 England begins the campaign with more land under her control than the Kings of Scotland, Wales, Norway and Ireland Combined. They can soon expect trouble though. They control so many regions that rebellions will occur, which results in the formation of the Barons Alliance. They start as the most powerful faction in the game.

At around turn 10-20 you will receive the option to send Edward on a crusade (If he hasn't been killed). Do so and later on he will emerge with a large crusading army consisting of-

- Edward and his bodyguard

The English have a poor variety of cavalry compared to some factions.

The English have access to the normal range of artillery which includes;

YOU can help us improve this Wiki! ~ Look for Ways to Help and Things to Do. ~ If you need further advice, please post here.
Retrieved from "https://wiki.twcenter.net/index.php?title=England_(M2TW:K_Faction)&oldid=79351"
Category: