Denmark begins the Teutonic campaign with control of the Jutland Peninsula, a piece of Scandinavia, and a small piece of land in the Baltic states area. While beginning the campaign neutral to all other factions, it would be wise for them to begin by asserting their control of Scandinavia before the Norwegians and peel back the forces of the Holy Roman Empire to the south. They must also watch for the Teutonic order, who they border in the Baltic sea. If they can take control of Scandinavia and defeat the Norwegians, they become a faction known as 'The Union of Kalmar', which is a union of Denmark and Norway, giving them access to new units. The army of Denmark is identical to in Medieval Total War II unless they become the union of Kalmar, in which case they gain the new Norwegian units. A certain bug however may prevent you from gaining these new units, as it has happened. The Danish army consists of Heavy infantry that wield powerful swords and axes, such as Huscarls and Scandinavian Axemen. They are in a position to have a strong navy and plenty of profitable naval trade. 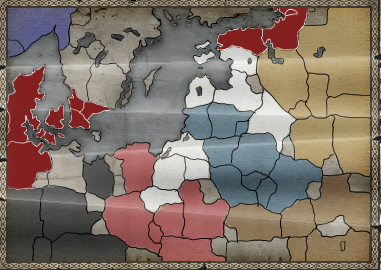 The Danes start in the most unique position of the campaign. While the Teutonic order starts split in two by Lithuania, Denmark starts on both ends of the map. Reval Narva in the east is a great base of operations, granting the Danish the opportunity to expand where they so wish. Their starting position makes them very suited for dominating the sea, in the typical viking way. The Baltic lies at their feet, and they can freely expand to take Gotland and Finland, and become a power in the east, attacking Novgorod. The other, more common possibility for expansion is to hold in the south, and attack the rebel settlements in Sweden, working on unlocking the Kalmar Union

In order to form the Kalmar Union, you have to control as Denmark the cities of Goteborg, Abo, Kalmar, Uppsala and Visby. After controlling these cities, you will receive the mission to kill the Norwegian king in either field battle/siege. Once you form the Union of Kalmar, your banner will change and you will get access to 3 Norwegian units available in castles: Svenner, Sami Axemen and Gotland Footmen (a Swordsmith Guilde must be present in the castle).

In order to have the Hanseatic League Headquarters present in your faction and to receive a trade boost, you have to control most of the following cities: Hamburg, Visby, Novgorod, Riga and Danzig. You already have the castle of Hamburg at the beginning of the campaign (I ussually turn it into a city for economical reasons) and Visby is a rebel city. I had the option to build this structure after controlling only 2 cities : Hamburg and Visby. No other guild should be present in the city where the Hanseatic League Headquarters is to be build, otherwise this option will not pop-up.

YOU can help us improve this Wiki! ~ Look for Ways to Help and Things to Do. ~ If you need further advice, please post here.
Retrieved from "https://wiki.twcenter.net/index.php?title=Denmark_(M2TW:K_Faction)&oldid=73911"
Category: