Norway is a faction in Medieval II: Total War Kingdoms which is highly based on powerful melee units being used to powerful and speedy extent. Norway is often considered the hardest faction in Britannia due to generals constantly rebelling and lack of power in field battles. However their units are highly advanced and even the cavalry are pretty good. They suffer from massive economic problems, but their islands aren't likely to get attacked by the AI, although there is always an inherent problem in competitive hotseat. To survive, Norway must either go and quickly take a large part of a rich land like Ireland, or must sack until your financial reserves are high enough. To sack well you must use the manoeuvrability and superiority of your boats to your advantage and ferry troops to advanced cities and then remove the troops after you destroyed every building in the city and sacked.

Using the Viking tactics described above will help you get settled in economically after about 10-20 turns after the death of King Haakon. It is sometimes better to just stay on your islands while raiding and wait for the right time to strike (make sure you have deployed spies in order to keep track of the other factions). When you finally see a weak, unguarded, region that would be easy to defend; strike hard and fast and show those fools the fury of the Norsemen! 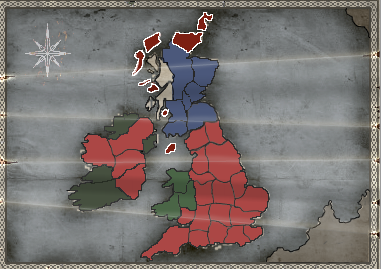 Norway starts on several islands off the coast of Britain and one region at the very north tip of the main Isle. The starting capital is Castle Town, located on the Isle of Mann. Castle Town will prove most valuble when launching attacks on any of the other four factions. Be sure to use your naval supremacy to secure the remaining smaller islands that begin under Rebel control before making any big assault moves on the two main islands (Ireland & Britain). It is a very good idea to have this task completed before King Haakon arrives; this will allow you to use his army more effectively and not be forced to split up his advanced units. When it comes to expansion your options are literally limitless. When controlling the islands you stand well posed to attack any of the other four factions in the game. Simply gather your forces and launch the attack, although you are very likely to come into conflict with Scotland early in the game, on very hard they almost always attack in the first few turns. Despite this, shrewd diplomacy can probably pacify them. The Isles are at their feet, and nowhere is safe from the Norwegian ships

At turn 2 you will receive reinforcements that spawn between the settlement of Wick and mainland Scotland. The reinforcements consist of two longboats. In the first longboat is a small army consisting of-

- General Gellir Hvass and his bodyguard

In the other longboat there is-

These reinforcements should help you invade some of the Scottish territories in the north, or help you reinforce certain regions that are under attack.

A few turns later you will receive an entire fleet of reinforcements consisting navally of 4 seperate longboat units and 3 dragonboat units (1 seperate, the other two together as one). Each fleet is filled with troops, and King Haakon himself who has the unique trait entitled 'King of Norway' which does-

In the first longboat of the fleet there is-

In the second longboat there is-

- 1 unit of Crossbowmen In the single Dragon boat there is-

In the third longboat there is-

- 1 unit of Svenner (with one copper experience stripe)

In the fourth longboat there is-

In the final fleet (2 Dragon boats) there is-

- King Haakon Haakonsson and his bodyguard

- 1 unit of Huscarls (with one copper experience stripe)

- 2 units of Svenner (with one copper experience stripe)

If you add Haakons army to the reinforcements received at turn 2, you will count 29 units including two generals, and 9 naval units. While this will greatly help you in your conquest of Britannia, you should also be aware of the upkeep needed to keep the army going. With the Norwegians fragile early economy, this is something to keep in mind. Haakon will also die early since he is fairly old entering the campaign.

Of all the kingdoms factions the most diverse in the kings purse is Norway, which gets a substantial boost when the king appears which is lost several turns later.

Good selection of siege assault weapons and anti-infantry field battles. Suffers against powerful ranged power and regular battles (although regular battles they still have a slight advantage over most factions)

Mostly shock troops with heavy 2 handed weapons that are effective against armour, but can be weak against archers.

YOU can help us improve this Wiki! ~ Look for Ways to Help and Things to Do. ~ If you need further advice, please post here.
Retrieved from "https://wiki.twcenter.net/index.php?title=Norway_(M2TW:K_Faction)&oldid=73915"
Category: