Novgorod is mostly identical to Russia in the original game. It starts with some provinces around Novgorod and an excellent general for leader, Alexander Nevski. 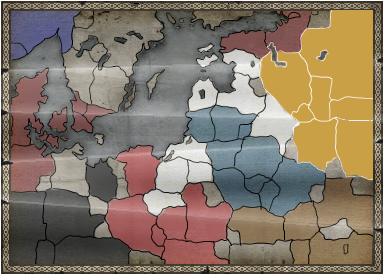 Novgorod starts in a squeezed, but solid front with the Teutonic Order to the west, the Danes to the north and the Mongols down south. They are the economic powerhouse of the campaign, and their units are by no means bad either. Novgorod can snowball when controlled well. They start with 10000 in their treasury.

To win a long campaign they must control 45 regions, including Marienburg and Visby, in addition to destroying the [Teutonic Order]. To win a short campaign the same requirements apply, though only 35 regions must be owned

The great city of Novgorod is treasured by its people, as it is considered an important hub for trade and a conduit between the Baltic Sea and Byzantium. Whoever controls Novgorod has control of the trade in the region, which, in these troubled times, means power.

Now is the time of the mighty Prince Alexander Nevsky. Alexander led Novgorod to intoxicating victories against the Swedes at the river Neva and against the Teutonic Order at Lake Chudskoe. However, he knows that the Western Tartar army lies to the east and that expanding west may cost them their homelands and possibly the loss of the great city itself.

Novgorod will never forget the atrocities the Teutonic Order brought to their homelands, but they present a face of neutrality for the sake of trade in the region. Choosing their enemies carefully and remaining neutral with other nations for as long as possible will be central to ensuring Novgorod maintains its position as the wealthiest city in the region.

Novgorod must establish a power base in its mighty capital through trade and strong defences to have a chance of success. Its large populations and loyal, experienced citizen army will ensure a strong local militia to defend its cities. With strong armies of local militia and limitless trade opportunities, Novgorod truly is a “Sleeping Giant” that will have the ability to march on any nation when it chooses to awaken.

Although Novgorod has a fierce citizen army, it is their Boyar Sons that are the pride of the nation. Novgorod must use the expendable local militia to ensure the Boyar Sons are not wasted on the front line. These warriors are second to none with a javelin, and with a sword or axe in hand they can match even the best. On the open plains, there is no more devastating a sight than an army of Boyar Sons riding with javelin in hand and all manner of armour and weapons glistening in the sun.

YOU can help us improve this Wiki! ~ Look for Ways to Help and Things to Do. ~ If you need further advice, please post here.
Retrieved from "https://wiki.twcenter.net/index.php?title=Novgorod_(M2TW:K_Faction)&oldid=77087"
Category: