The Crusades Campaign is one of four campaigns available in the Kingdoms expansion to Medieval II: Total War.

The Crusades campaign takes place in the year 1174 AD, right before the Third Crusade, and continues on towards the Fourth Crusade. It provides the player with an opportunity to either expand the Crusader factions land or/and to see if they can defend the Holy land from the revenge seeking Muslim factions. The player also has the opportunity to play with the Islamic factions and to hopefully bring them success in retaking the Holy lands. The Byzantine Empire (M2TW Kingdoms) is also playable, which will allow the player to defend and bring back the former glory the once mighty Byzantine Empire, from the armies of the Turks (M2TW Kingdoms) and even from various European foes.

Download Frogbeasteggs' Guide to the Crusades Campaign here: http://www.twcenter.net/forums/attachment.php?attachmentid=144150&d=1298718179 Some of the text on this page comes from that guide, it is worth reading the whole thing. 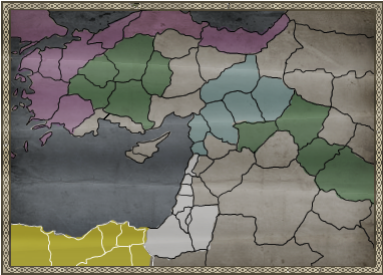 The map extends east from Constantinople to Baghdad, and south from Georgia (country) to Egypt. The starting territories of Egypt (yellow), Turks (green), Antioch (blue) Jerusalem (white) and Byzanitum (Purple) are shown.

It is important to note that many of your best units cannot be constructed without Jerusalem - defend the capital at all costs.

The Principality of Antioch

http://forums.totalwar.org/vb/showthread.php?91162-Crusades-Campaign-Byzantium The Crusades campaign is the only opportunity to play as Byzantium with all of their advantages and none of their drawbacks. Due to the map layout you are not surrounded by numerous hostile in this campaign. Due to the timescale and set up your units do not become outdated and weak in comparison to the gunpowder and gothic plate of every other faction on the map. Byzantium retains its fabulous wealth and powerful early unit roster. Byzantium’s campaign strategy shares the adventure game guide tone of Egypt’s. East, south, west. Turks and rebels (east), Christian kingdoms and rebels (south), Egypt (west). The western and northern borders are as secure as can be, thanks to the edge of the map. The Mongols will arrive far from your heartlands. Your historical hero is present at the start, so there will be no sudden economic shock, and your economy begins as an absolute powerhouse. The only pitfall Byzantium needs to be aware of in the early game is a historically triggered event which dumps some Venetian crusaders near Constantinople.

Philip II Augustus - Can temporarily increase the attack and stamina of his troops on the battlefield.

Richard the Lionheart - Has the ability to immediately rally any routing units.

Nur ad-Din - Can temporarily increase the attack speed and morale of his troops on the battlefield.

Salah al-Din - Has the ability to greatly inspire his troops. Setting their morale to full.

Manuel Komnenos - Can cause chaos amongst an enemy unit, removing them from play until order is resolved.

There are many relics that leaders can pick up for performing famous deeds in addition to the usual ancilliaries. There are muslim relics for the Islamic factions and Christian relics for the Christian factions. Some of these relics are quite powerful.

The Mongols and the Plague

The Mongols will arrive on the eastern edge of the map (south-east of Baghdad) between 1244 and 1260 (turns 78-82) in several waves (of increasing strength but in a maximum of three stacks each) so keep spies and lookout towers out there looking for them. Go here to read more about the Mongol invasions of Syria: http://en.wikipedia.org/wiki/Mongol_invasions_of_Syria The plague will also strike around turn 88 and the Muslim factions can build Bimaristans to ameliorate its effects. The plague hits Alexandria first, in 1347. In 1348 it hits Gaza, Lebanon, Syria, and Palestine. In 1349 it hits Antioch, Mecca, Mosul, and Baghdad.

Your game has to keep going for 60-65 turns before the gunpowder event occurs.

Soon after your troops first visit the desert in the south-east corner of the map, there will be a flood that will drown them. Yes, a flood in the desert.

YOU can help us improve this Wiki! ~ Look for Ways to Help and Things to Do. ~ If you need further advice, please post here.
Retrieved from "https://wiki.twcenter.net/index.php?title=The_Crusades_Campaign&oldid=60918"
Category: