Wales are a new faction introduced in M2TW Kingdoms. 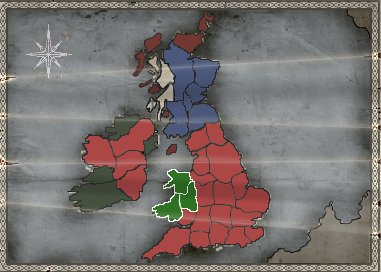 Wales is possibly the hardest faction in the Britannia campaign bar Norway , due to a relatively poor starting position (with only 3 settlements). Thankfully it's very easy to defend this position, owing to high quality welsh archers and spearmen, the hilly geography of Wales and the easily defended forts.

Defence should not be a priority for Welsh leaders however, instead, attacking the English very hard, very early is the surest ways of securing victory in any Anglo-Welsh war. The starting Welsh King Llywelyn is quite a good general and is also the Welsh hero. He is particularly good at fighting the English. A good strategy is to strike out all the English towns on the Welsh border early on and then build up from there.

The Welsh Start at war with the English. A diplomat should be sent to the Scottish, the Irish, and Norway to try and recieve an alliance. If possible, ally with the Barons Alliance, when and if it appears.

The hero of Wales is Llywelyn ap Gruffydd. He has the unique 'Hero of Wales' trait which does-

If Llywelyn is alive and you capture Cardiff, Chester or Shrewsbury, you will receive waves of reinforcements. The reinforcements spawn outside certain settlements. This will however only work if the official 1.05 update had been installed since the original script is broken, also if Llywelyn has died or if it's under turn 20 it won't work either. Here are the units that appear-

Upon capturing 1 border settlement you will gain the following units-

Appearing west of Montgomery you will receive:

Appearing north of Caernarfon you will receive:

Upon capturing 2 border settlements you will gain the following units-

Appearing south-west of Montgomery you will receive:

Appearing east of Caernarfon you will receive:

Upon capturing 3 border settlements you will gain the following units-

Appearing north of Cardiff you will receive:

Appearing south of Chester you will receive:

Also, if one of the initial welsh cities is taken , they will recieve a few units to help take it back. This will ONLY happen if the faction attacking you is england, and if it is under turn 20 . If this happens then you will recieve-

More cunning players who want a gamble may want to combine these factors. If all three English border settlements are captured and all 3 of the Welsh settlements are captured, Wales will receive the maximum value of 60 units as reinforcements, and all of them free. This is obviously something to consider if you're playing as Wales, although you may also want to keep an eye on the upkeep needed to fuel the army.

Welsh units tend to be lighter than the other factions, it's worth noting that Saethwyr archers are excellent longbowmen that have more men per unit than most other missile troops. They also have a number of quality spearmen including the skilled Merryionid spearmen and heavily armoured Morgannwg Spearmen, who are easily capable of protecting the archers flanks from enemy cavalry (assuming stakes are protecting the archers front). As well as this, two handed axe-men fill the role of shock infantry, and can deal with most infantry units, especially if they have been weakened by longbow fire first. The Welsh are somewhat lacking in heavy cavalry however, being only able to recruit teulu as effective Heavy cavalry. Others are available but very light. They do however get skilled mounted and dismounted javelin skirmishers that can inflict heavy casualties on heavier troops if well protected.

As mentioned in-game, Welsh units can also take on multiple roles on the battlefield. Their Saethwyr archers can be used as effective infantry as well as archers (due to their armour piercing battle mallets and high troop numbers), their gunners (being heavily armoured and armed with axes and shields) can also double as heavy infantry, their heavy spearmen can fight well against enemy infantry in melee as well as cavalry, their mounted skirmishers provide powerful charges, and their foot skirmishers can act as fierce spearmen (due to their lack of a secondary weapon) against cavalry.

If a high culture of welsh is present then welsh merceneries will appear for a cost. Only available for other factions then wales they are

While playing in the Brittania campaign, you CAN recruit units which ARE NOT from your factions! For example: You capture a Norwegian or Scottish town, you have access to they're units depending on the culture. So if you capture a capital with HIGH Culture- you can build that factions best units!

guide at the org.

YOU can help us improve this Wiki! ~ Look for Ways to Help and Things to Do. ~ If you need further advice, please post here.
Retrieved from "https://wiki.twcenter.net/index.php?title=Wales_(M2TW:K_Faction)&oldid=73916"
Category: